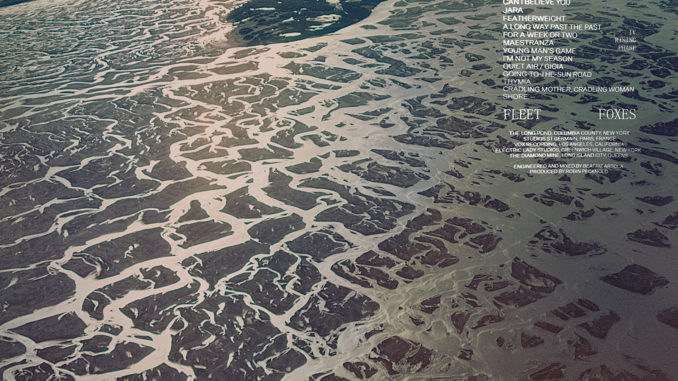 Today September 22, on the Autumnal Equinox, Fleet Foxes released their fourth studio album Shore at 15:31 CET/14:31 UK time. The bright and hopeful album, released via Anti-, is available to stream and for physical pre-order HERE for a February 5th street date. In addition to the album, a 16 mm road movie of the same name by Kersti Jan Werdal that showcases the landscapes of the Pacific Northwest set to the score of the album is available to view at https://fleetfoxes.co.

Shore was recorded before and during quarantine in Hudson (NY), Paris, Los Angeles, Long Island City and New York City from September 2018 until September 2020 with the help of recording and production engineer Beatriz Artola.The fifteen song, fifty-five minute Shore was initially inspired by frontman Robin Pecknold’s musical heroes such as Arthur Russell, Nina Simone, Sam Cooke, Emahoy Tsegué-Maryam Guebrou and more who, in his experience, celebrated life in the face of death.

“I see “shore” as a place of safety on the edge of something uncertain, staring at Whitman’s waves reciting ‘death,’” commented Pecknold. “Tempted by the adventure of the unknown at the same time you are relishing the comfort of the stable ground beneath you. This was the mindset I found, the fuel I found, for making this album.”

”Since the unexpected success of the first Fleet Foxes album over a decade ago, I have spent more time than I’m happy to admit in a state of constant worry and anxiety. Worried about what I should make, how it will be received, worried about the moves of other artists, my place amongst them, worried about my singing voice and mental health on long tours. I’ve never let myself enjoy this process as much as I could, or as much as I should. I’ve been so lucky in so many ways in my life, so lucky to be born with the seeds of the talents I have cultivated and lucky to have had so many unreal experiences. Maybe with luck can come guilt sometimes. I know I’ve welcomed hardship wherever I could find it, real or imagined, as a way of subconsciously tempering all this unreal luck I’ve had.”

”By February 2020, I was again consumed with worry and anxiety over this album and how I would finish it. But since March, with a pandemic spiraling out of control, living in a failed state, watching and participating in a rash of protests and marches against systemic injustice, most of my anxiety around the album disappeared. It just came to seem so small in comparison to what we were all experiencing together. In its place came a gratitude, a joy at having the time and resources to devote to making sound, and a different perspective on how important or not this music was in the grand scheme of things.”

”Music is both the most inessential and the most essential thing. We don’t need music to live, but I couldn’t imagine life without it. It became a great gift to no longer carry any worry or anxiety around the album, in light of everything that is going on. A tour may not happen for a year, music careers may not be what they once were. So it may be, but music remains essential. This reframing was another stroke of unexpected luck I have been the undeserving recipient of. I was able to take the wheel completely and see the album through much better than I had imagined it, with help from so many incredible collaborators, safe and lucky in a new frame of mind.”

About Shore The Film

Shore is an art piece filmed over the course of a month in Washington, Oregon, and Western Idaho on 16mm film.

“I listened to the album while driving, and observationally shot landscapes that I felt resonated with the music, yet also stood on their own,” explained Director Kersti Jan Werdal. “The film is intended to co-exist and engage with the album, rather than be in a direct and symbiotic relationship with it. The urban and narrative scenes interact with the more surreal landscapes, rather than sit in opposition of one another. My hope is that the film, much like the album does, reflects optimism and strength.”

Kersti Jan Werdal is an artist working in film, photography, installation, and collage.

Fleet Foxes self-titled debut made a profound impact on the international musical landscape, topping numerous Best Of lists, including Rolling Stone’s 100 Best Albums of the 2000’s and Pitchfork’s 50 Best Albums of 2008.
Fleet Foxes is certified Gold in North America and Platinum in both the UK and Australia. The follow-up album Helplessness Blues was met with the same critical praise as its predecessor (MOJO five stars, Rolling Stone four stars, Pitchfork Best New Music); that album debuted at No. 4 on the Billboard Top 200, went Gold in the UK, and earned the band a GRAMMY nomination.

Six years later, the highly anticipated album Crack-Up was released, with AP saying “Rewarding, involving and meticulous, Crack-Up has been well worth the wait” and Uncut calling the album “Astonishing. Crack-Up may be the most anticipated release of the year, a welcome return. Ambitious, mature, meticulous.” The band embarked on a world tour that saw them headlining major festivals and their own sold out shows throughout 2017-2018.