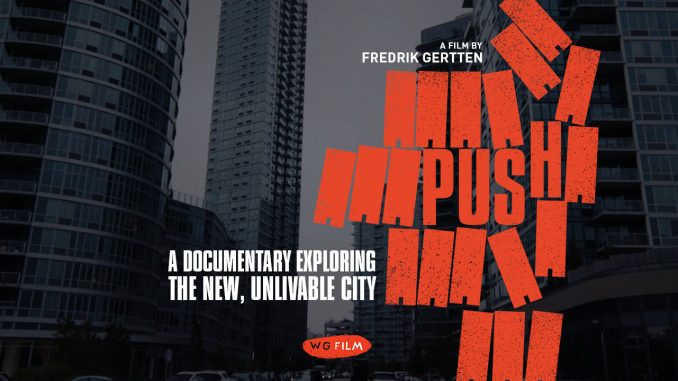 After CPH:DOX, PUSH will travel to Toronto and have its official North American premiere at Hot Docs. Come say hello to the film’s producer Margarete Jangård and the film’s director Fredrik Gertten, as well as Leilani Farha.

We are proud to announce that we have partnered up with New Media Advocacy Project (NMAP) to launch an impact campaign for PUSH in New York City.

New York is one of the biggest cities affected by the housing crisis, so the impact campaign will focus on using the film as a tool to start a conversation between the citizens and those in power, in order to make change.

Housing prices are skyrocketing in cities worldwide. Incomes are not. The working and middle classes are getting pushed out of cities, while financial powerhouses use housing as a place to park money.

PUSH is a new documentary from award-winning director Fredrik Gertten, investigating why we can’t afford to live in our own cities anymore. We follow UN Special Rapporteur on Housing, Leilani Farha, on her quest to understand who’s getting squeezed, who’s getting rich and why housing has become one of today’s most pressing world issues?

Now that PUSH is released, we have gotten so much attention and love from near and far, so if you want to be in the loop on what’s happening with the film, don’t forget to follow our social media channels below!

“Push: a gripping new film about how global finance is fuelling the housing crisis and making cities unaffordable to live in.”
– Patrick Butler, editor of society, health and education policy for The Guardian.

“The film is fantastic. It’s incredible in how it shows the current conflict in which we live when housing is seen as a commodity.”
– Maria Lúcia de Pontes, Brazilian lawyer, public defender and activist.