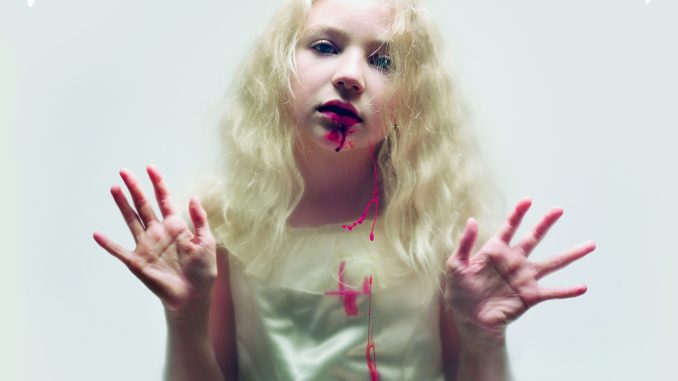 What do you get when you combine elements of the Cramps, the Yeah Yeah Yeahs, Alice Cooper, Ozzy Osbourne and The Runaways? You get STARCRAWLER.

STARCRAWLER are a Los Angeles rock band who formed in 2015 when 18-year-old lead vocalist Arrow de Wilde first met guitarist Henri Cash at their Echo Park high school. Shortly thereafter they were joined by the rhythm section of Austin Smith (drums) and Tim Franco (bass). The foursome play with squalling riffs and thundering beats, and their incendiary live shows, fronted by de Wilde’s otherworldly magnetism, are truly captivating. Gigwise (UK) recently stated that “Starcrawler are simply the most exciting – and best – band Rough Trade have signed in years.”

Rough Trade is excited to announce details for their upcoming self-titled debut album, which will be released on January 19th, 2018. Recorded by Ryan Adams on analog tape at his Pax-Am studio, the 10 songs on the album prove that yes, they ARE making rock and roll exciting again! Ryan has been tweeting up a storm about them saying things like “This starcrawler record is gonna peel the paint off your brain!” and “Starcrawler are so fucking insanely good. Soon they will rule this galaxy.”

The first single from the album is called “I Love LA” and the video, directed by famed music photographer Autumn de Wilde (AKA Arrow’s mom) is a fun and feisty homage to the city of dreamers. Opening in a donut shop/Chinese food restaurant, the video follows Starcrawler as they drudge through the monotony of their day jobs. Once they break into song, the band is transported to Hollywood Boulevard and transformed into the captivating, glam rockers anyone who has seen a Starcrawler show knows them to be.
I Love LA video/track: http://rtrecs.co/ilovela

After signing to Rough Trade earlier this year, they quickly released their debut single “Ants”, which caught the ear of Elton John who played the track on his Beats 1 radio show. Soon after, they were on the cover of LA Weekly – their hometown paper. The headline was “With Fake Blood and Frenetic Songs, Starcrawler make rock feel dangerous again”. In the article, Arrow describes that “bands are boring nowadays” and that “there’s no mystery”. That helps explain a little bit of why their shows have become the stuff of legend. They also recently played LA’s CalJam Festival, which is curated by Dave Grohl (Starcrawler was the first band he reached out to, and he raved about them the next day on KROQ.) Gerard Way is also a fan, describing them as a “mix of 70’s theatricality and Stooges electricity.”

“Arrow de Wilde is what would have happened if Ozzy Osbourne and Patti Smith had got together in 1975 and had a kid” – Classic Rock
“Glam – shock Los Angeles delinquents find hope for rock n’ roll” -Mojo
“Step back, mopey indie rock singers, because a wild young lead vocalist named Arrow de Wilde has been tearing through the city, kicking up rock ’n’ roll dust with the force of the Tasmanian Devil.” – Los Angeles Times
“Starcrawler Channels the Most Iconic ’90s Rock Groups in the BEST Way”
– Teen Vogue
“Tales of de Wilde’s onstage antics could fill a dissertation, as this performance poises equatable only to the likes of Iggy and the Stooges onstage debauchery, the PJ Harvey Trio’s lightning god rock, and the sexually charged cabaret no wave of Lydia Lunch. Ultimately, Starcrawler are simply the most exciting – and best – band Rough Trade have signed in years.” – Gigwise