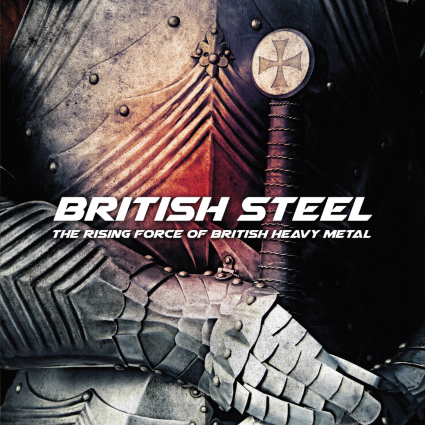 Something appetising is brewing – come take a sip. Blighty (that’s Great Britain to you non-Brits) 2017, the ostensible home of Heavy Metal, is spawning quality and varied acts ready to compete with the best of our neighbours. A younger generation, brought up with a broad knowledge of heavy music, have decided that they aren’t interested in pushing the boundaries of technique, production and extremity. Instead, these bucks seek only to find their own sound and write songs of the quality they grew up with on the family stereo. This passion for heavy music gives these ‘sons of their fathers’ the confidence to make exactly the music they want. Accusations and labels like ‘retro’ and ‘old school’ roll like water off a metallic aquatic. If you plug away passionately for more or less ten years to tiny crowds with little or no support, it’s hard to engage with such negativity. And make no mistake, all of the acts here live and breathe this stuff. They’ve been playing since they were teens, you’ll see them front row at all the shows, and if no-one is offering gigs they’ll put them on themselves. And it’s no lie to say we had too much choice for this Steel platter. Our cup overfloweth! So is this a movement? Do we name it and define it? Nope, for to do so would allow us to dismiss it and this varied buffet is not going away. So let’s introduce the players…

Amulet
Highwayman
Formed in London in 2010, the meaty Amulet are one of the more established names in this emerging UK scene. With a popular and multiple re-pressed EP and debut album under their belt – plus many acclaimed festival appearances and foreign excursions – these five lads are set to unleash their long-crafted and anticipated second album in early 2018. The catchy ‘Highwayman’ we have here is a demo version from said platter. Watch out!
Facebook

Aggressive Perfector
Harlot’s Spell
Next up are a relatively fresh and blistering three-piece from Manchester. Taking their name from an early Slayer track suggests a certain speedy approach which they meet, but these talented chaps are full of surprises. Take the track ‘Harlot’s Spell’ here, It’s a catchy, mid-spaced metal stomper with some lovely licks and stonking riffs. We await their debut with evil relish!
Facebook

Eliminator
Lost To The Void
Lancaster’s Eliminator have released several brilliant demos and singles over the last six years, and delivered many a killer show with their well crafted dual guitar led Heavy Metal. After a seemingly quiet few years ‘Lost To The Void’ they are back with fantastic new singer Danny Foster and a full album of confident and epic tunes sure to shake the scene. The track here is an old song specially re-recorded to show off Danny’s pipes. We’re beyond excited about these talented lads’ future!
Facebook

Dungeon
Queen Of Sin
Born in English Hell, these Londoners are led by scene hero Luke Drew, with a team of the big smoke’s finest warriors in support. This is raw, dirty 80s speed metal thrash with a song-writing focus and fun aggression live. A pair of well received demos/EPs and plenty of shows finds them about to unleash a new EP in 2017, of which ‘Queen Of Sin’ is a filthy teaser!
Facebook

Dark Forest
Where The Arrow Falls
Forest are the undoubted ‘daddies’ of the young traditional metal underground in the UK. Formed in 2002, the West Midlands five-piece have four albums under their belts and a fantastic line-up, led by Christian Horton’s effortless and epic song-writing. Devastating live, we are proud to present ‘Where The Arrow Falls’ from recent album ‘Beyond The Veil’. And we await their next disc with bated breath!
Homepage
Facebook

Toledo Steel
Rock Nights
Since the band’s inception on England’s South Coast in 2011, Toledo Steel have quickly emerged as one of the UK’s leading forces of Heavy Metal. Their knack for catchy song-writing and excellent musicianship have been heard on two self-released EP’s and at countless shows across the UK and Europe. As they work to complete their anticipated debut full-length we are pleased to present the brilliant and chunky new track ‘Rock Nights’ in advance. Rock!
Homepage
Facebook

Vuil
Iron Witch
Oof! Scotland’s Vuil are another relatively new three-piece with a penchant for metal punk heaviness and a gift for song-writing. Formed in 2012, but with three demos and a couple of singles under their studded-belts already, these blasphemers are not messing around. And here we have blistering brand new track ‘Iron Witch’ from an upcoming new release. These sickos are definitely ones to watch!
Facebook

Seven Sisters
The Witch’s Eye
West London’s Seven Sisters are young bucks causing a storm on the international scene with their song-writing chops, musicianship and killer live show. After an acclaimed demo, their eponymous debut album has recently sold out. Here we have the exclusively recorded and extremely speedy ‘The Witch’s Eye’, showing the breadth of their ability and approach. Needless to say, we are on tenterhooks for their follow-up record!
Facebook

Insurgency
Destined For Death
Lancaster’s heaviest sons, three-piece Insurgency are a blistering, war-obsessed act with an unrelenting approach which entirely works. Formed in 2012, the speedy act released a well received long-form EP titled ‘Death March’ in 2014. What we have here is the brilliant ‘Destined For Death’ from the upcoming Militant Death Cult EP. Be sure to catch these maniacs live. Get ready to die!
Facebook

Neuronspoiler
Slay The Beast
Londoners Neuronspoiler have worked tirelessly for nearly a decade to deliver the prime Heavy Metal we crave. Combining positive, fist-pumping tunes with precise playing and elements of classic rock and thrash gives these five chaps their own approach. The epic ‘Slay The Beast’ presented here is taken from their second full length album, ‘Second Sight’. Are you strong enough?
Homepage
Facebook

Wytch Hazel
Freedom Battle
Once again from Lancaster, but something a little different. The brilliant Wytch Hazel take an 80s song-focused approach to Heavy Metal with a mid-70s sound and sensibility. Colin Hendra has a genuine song-writing knack to accompany the band’s fantastic and tasteful playing. The act have rightly caused a storm with their live shows, acclaimed demo and recent album ‘Prelude’, of which ‘Freedom Battle’ here ends our journey into Rising British Metal. Let’s play again!
Homepage
Facebook