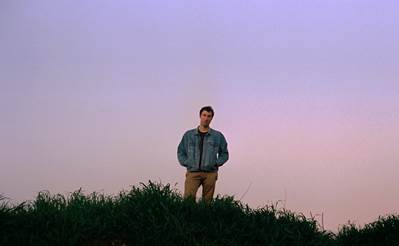 Today marks the release of the self-titled sophomore album from Los Angeles Police Department. The project of LA based singer/ songwriter Ryan Pollie, LAPD is melody driven bedroom pop at its best, channeling timeless songwriting filtered through a contemporary lens.

Produced by Foxygen’s Jonathan Rado (Whitney, The Lemon Twigs) and mixed by Rob Schnapf (Beck, Elliott Smith, Foo Fighters), Los Angeles Police Department is an album built on buzzily iridescent synths and beautifully downhearted melodies. “The first record was a guitar record and now it’s very keyboard-heavy, very dense and full compared to what the other record was,” says Pollie. “It’s still a pop record and Jonathan made it sound homemade, but we really worked to make it bigger in scale.” Pollie combines the melodic gambits of Randy Newman with the pop clarity of Paul McCartney, the fanciful ingenuity of Brian Wilson with the narrative acuity of Pete Townshend. It’s an album full of inventive flourishes—the gentle surge into Pollie’s upper register on “Sooner or Later,” the acoustic guitar that gives “If I Lied” its folk-rock energy, the symphony of keyboards and synths that allow “The Plane 2” to achieve liftoff.

At the heart of Los Angeles Police Department are lyrics that reveal an artist writing from the gut and spilling his darkest secrets. In fact, Pollie’s intensely vulnerable songwriting inspired him tochoose such an anonymous moniker in the first place. “I really wanted to juxtapose something cold, sterile, and bureaucratic with the most personal and emotional parts of my life,” he says.

Praise for Los Angeles Police Department:
“The songs often center around Pollie’s insecurities in forthright terms, focusing on opening himself up to love at the risk of losing it. It’s therapeutic in its own way.”- Bandcamp
“Gloriously arranged with a late-summer-light country rock haze.” – Pitchfork
“More ambitious in scope without losing any of the soothing intimacy of his earlier work.” – Stereogum
““She Came Through (Again)” is the first track, recorded by Pollie in his bedroom and mastered by Warren Hildebrand. The title says it all. Sometimes you slip up, and in the best of sometimes you still squeeze by. I let her down/ I was wrong/ …But she came through again.” – The Fader
“Tender instrumentation and a frail croon.” – SPIN
Los Angeles Police Department – Press Photo – Credit Eddie O’Keefe