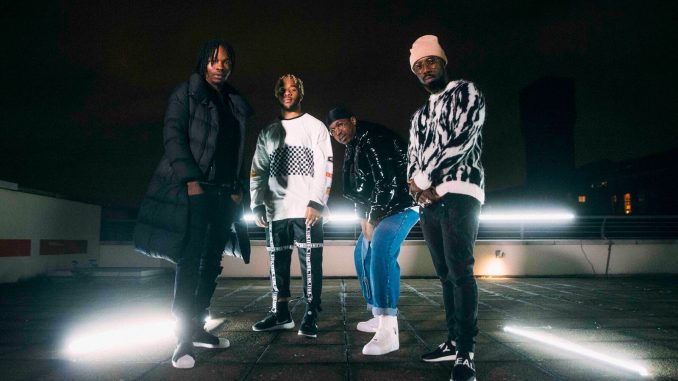 Short on the heels of their debut single as artists “Hot Property”, which has been supported by BBC 1Xtra, Capital Xtra, Rinse FM,Radar Radio, The FADER, Wonderland Magazine, Highsnobiety, Earmilk, GRM Daily and Link Up TV, among others, London-based artist/producer trio Team Salut return with their exciting new single “Wagon” featuring Afrowave pioneer Naira Marley, as premiered exclusively via Complex and BBC 1Xtra.

Produced by Team Salut themselves, on the back of an already stellar production discography, which includes work with PARTYNEXTDOOR, Stefflon Don, ZAYN, Rita Ora, Anne-Marie, Emeli Sande, Yxng Bane and Big Tobz, to mention a few, ‘Wagon’ is a smooth UK rap offering, laced with an infectious bassline, memorable sing-along moments, catchy melodies from Team Salut, and raw and captivating verses as we have come to expect from Naira Marley.

Speaking about how “Wagon” came about, Team Salut say, “Wagon” was a blessing in disguise. We invited Naira Marley to record on another beat, but later felt his lyrics could be better placed on a smoother production. We came up with a hook to reflect his lyrics, which centred around car analogies, with Mr. Wood and Sidechain Manny handling vocal duties, and getting to showcase their artistry side. We love the G wagon and decided to theme the song around it.

We’ve always loved Naira Marley and his raw style of singing, so his style and our music just made too much sense. He flowed so naturally and brought so many sing-along moments to the record. ‘Wagon’ is about living in the moment – especially after the party, where both the guy and girl know what they mutually want. The song is about not being shy and doing something about it. We’re sure people will love it”.

While Team Salut have been shaping the UK “Afrowave” sound and scene as producers over the past 18 months, garnering a UK Top 40 single, over 50 million plays, and co-signs from the likes of BBC Radio 1, Soccer AM, Channel 4, Spotify and Boxpark along the way, these last few months, first with the release of “Hot Property” and now “Wagon”, have quickly highlighted the London trio as ones to watch for 2018, not just as producers, but as artists in their own right.