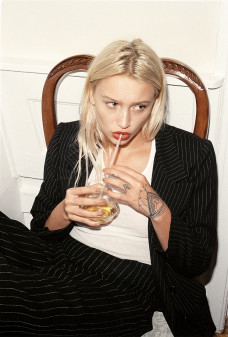 September Rose puts Cailin Russo’s flawlessly emotive vocal over a bed of jazz-infused hip-hop, that leaves little to be desired in a debut single.

It hits hard, takes you on a journey and leaves you begging for another fix. It’s sweet but sexy, smooth but provocative.

September Rose is OUT NOW. Listen on: SoundCloud & Spotify

The daughter of punk band Unwritten Law frontman Scott Russo, the LA-based 22-year old absorbed the music scene developing around her from day to day. This spark grew quickly and fiercely into a deep thirst to express herself through her own music, and if September Rose is anything to go by, this unique talent could grow into something magnificent.

“Roses don’t grow in September.” Cailin explains, “September Rose is about a young love relationship happening and isn’t working because it’s not the right time.” This subtle, powerful concept lies behind a song so laid back and summery, making for a rare and beautiful drama. September Rose is jazz, pop, R&B and soul to boot. Cailin is ballsy. It’s not everyday a singer of this calibre debuts with a song that’s so hard to categorise.