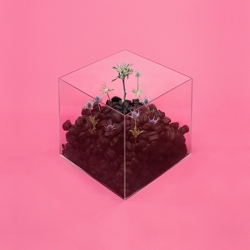 Today sees the release of a new single, “Wake,” from Brooklyn-based Chrome Sparks. “Wake” highlights Chrome Sparks penchant for creating florid orchestral electronica that can turn on a dime into an explosive beat.

“Wake” is being released via Counter Records and marks Chrome Sparks first piece of new music since last Fall’s “All Or Nothing” single.   He will be performing at this year’s SXSW Festival later this month and touring Europe in April – dates are below. The shows mark Malvin’s first live appearances since a Fall tour that included both headlining shows and select dates as the support for Flume.

Chrome Sparks (Jeremy Malvin) first burst into electronic music consciousness in 2012 with “Marijuana,” a Bandcamp compilation track turned Internet phenomenon (organically rocketing to #1 on HypeMachine and racking up over 18 million cumulative streams to date). Since then he’s released three EPs via Future Classic (including subsequent breakthrough track “Moonraker”), remixed Chet Faker, Porter Robinson, Fred Falke and Blackbird Blackbird among others, and played sold out shows throughout North America, Australia, New Zealand and Asia. Along the way he’s converted a legion of supporters to his deftly hybridized sound, including Pitchfork, Dancing Astronaut, Indie Shuffle, and FADER. He can also count  Annie Mac and Triple J as supporters on radio and fellow music-making champions in Bonobo, Laurent Garnier and Anna Lunoe. His classical training in percussion lends a strong beat-centricity to his productions, and his background playing in bands manifests itself in carefully considered live performances.