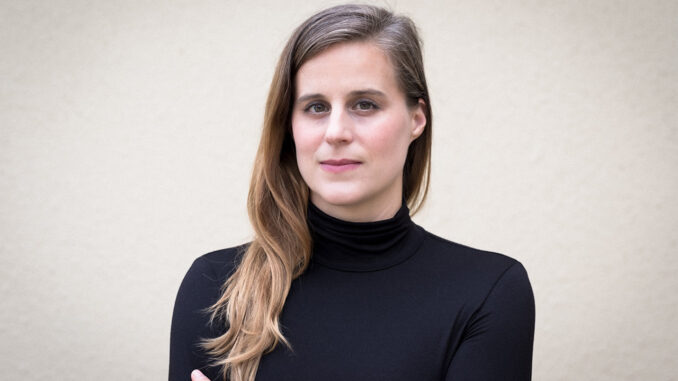 Lauren Groff is one of the worlds best authors. Barack Obamas favourite, as well as a favourite voted for by both readers and critics. She has never written a non-prize-winning-book. We had the chance to interview Lauren Groff and talk about Matrix, her first novel in Swedish, her love for Henry James, being a favourite, and medieval Europe … With spices, wine, love, lots of humour, climate change and action!

– Congratulations on getting your very first book translated into Swedish!

– Thank you! I love Sweden dearly, and am so delighted to have a book translated into Swedish.

– Writing about medieval Europe – is that like a comment on America today (which sometimes can seem rather feudal) or is it sometimes luxury escapism? Or maybe both?

– It is certainly not luxury escapism, ha, ha! I think some historical fiction is certainly escapism, there’s a relief of urgent everyday pressures by looking away, at the past, but in fact, my intention was to do the very opposite: to create a tuning fork where the past and the present were speaking across the distances, to speak about the twenty-first century in America by looking at the roots of how we got to where we are. America is absolutely feudalist, and clinging to a Western mindset first set into action during the time of the Crusades. I wanted to implicate the reader, to throw a sharp moral lasso drawing together the humans of then and the humans of now.

A hero that is gawky, rude, unlovely and a bastard child

– How would you introduce your heroine?

-My heroine Marie is loosely based on a real figure, the first known female poet to be published in French, Marie de France. There is very little known about her, so I had to return to Marie de France’s work, and pluck out imagery and ideas on which I built an imagined biography. My Marie is gawky, rude, unlovely, the bastard child of Geoffrey d’Anjou, unwanted by her brother’s family, and cast to a nunnery to see if she can bring the nuns there out of a starving time. Marie is passionate, carnal, intelligent, and convinced that she has greatness in her, if not goodness.

Delighted to find incredible things in the historical archives

– Did you spend a lot of time travelling for your research?

-I did a little travel: I went to an abbey of Benedictine nuns in Connecticut called Regina Laudis, and was allowed to stay at the guest house and work with the nuns there for a spell. I fell in love with the masses I was allowed to sit in at, the voices of the nuns raised in song.

– Did you find anything that really surprised you, to use for the book?

– I am delighted to say that I found a trove of incredible things in the historical archives. I went down deep rabbit holes on falconry, the lives of the kings of the middle ages, the daily routines of holy women, the apocryphal stories of Eleanor of Aquitaine. I could have spent years in sheer joy in the archives. One fact that I love is that a haggard was a hawk caught in the wild and tamed; in English, the word haggard means looking unkempt, exhausted and unwell. One can see the direct link!

– Have you tried a lot of medieval cooking and wine … ?! They DO live the good life!

– I have not! But I did read about medieval cookery and it is wild – they used so many more spices and flavorings than I think the modern mind gives them credit for.

– Matrix is so funny! Like The Canterbury Tales funny! Did you think of medieval times as funny before writing the book?

– Oh, this makes me so glad! Of course I loved Monty Python’s take on the medieval times, the Search for the Holy Grail, but I only fully saw how hilarious people were back then when I was in the archives and kept coming up on these little subversive drawings in the corners of manuscripts, called drolleries. They’re wonderful: nuns plucking penises off of penis trees, rabbits going to war on snails with old prophet’s faces, an archer shooting a merman in the butt! I think a common misperception is that life in the medieval ages was solemn and dark – possibly because the vast majority of extant written records are, for the most part, liturgical or sacred texts- but people then were as wild and funny and strange as they are now.

– Are people surprised by your describing climate change in medieval times?

– Immensely–but of course, where there are humans, there is climate change. Our first ancestor who held an ember from a lightning-struck tree to a pile of dry leaves and watched it go up in smoke was engaged in climate change, transforming what would have become humus to carbon. I wanted to show how long and serious human impact on the natural world has been, how much of it is based on a misreading of Genesis: God giving dominion over the animals of the seas and earth and air somehow becoming God giving domination over these things. A terrible tragedy.

Wouldn’t be able to write if thought about the praise

– Winning prizes and being Obamas favorite! Is praise important, inspiring or just “the cherry on top”?

– Oh, lord, I wouldn’t be able to write at all if I thought about it for a second! You have to create two selves, the author who talks about the work and is the outward face of the work, and the writer, whose vulnerability and love and intentional failures the author protects by being the hard shell.

– What’s the most fun about writing a book like Matrix?

– I write many, many intentionally ugly drafts of all of my work before I let myself at last delight in the play of sentences. I began writing as a poet, and the urgency to be attentive to language builds in me over the months and years of preparatory work until when I do let myself luxuriate in the sentences, it’s sheer, bold, beautiful joy.

Marie would be hard to take in large doses

– Do you have any favourite characters in Matrix ? Who would you most like to hang out with?

– I think Marie would be hard to take in large doses, but would love to hang out with Eleanor, as long as she wasn’t feeling mean or vindictive that day. Eleanor of Aquitaine is one of the greatest figures in medieval history, a lover of stories and music and beauty, canny and brave, and I would sit beside her and listen to her speak for days.

– The tone and rhythm and themes of some of your novels sometimes remind me of Henry James. Are you a big Henry James fan? I am! Which book is your favourite?

– I’m an enormous Henry James fan! Right now, I have three of his novels on my nightstand: The Princess Casamassima, The Golden Bowl, and The Ambassadors – the only three James-novels I’ve yet to read. I have a probably sentimental love of The Portrait of a Lady, because it was the first book of his that I ever read as a teenager, the first that shook the foundations of what I thought a novel could do.

Start most days by reading a poem

– What inspires you the most? Do you have favourite music to listen to when you write?

– Reading poetry inspires me the most – I start most days by reading a poem. And when I do listen to music, it has to be in a language I don’t understand because otherwise I stop working to listen to the words. I love Sigur Ros, Arvo Part, and the more repetitive and non-linguistic work of John Cage.

– Do you have any childhood favourites or current favourites that you always come back to, for inspiration or just because they are so good?

– I have so many! Right now, I’m deeply in love with Roberto Bolano’s brain, and have been rereading By Night in Chile obsessively. I have the same awed love of Virginia Woolf, Dante, Anne Carson, W.G. Sebald, Murasaki Shikibu, the list is endless.

The next book: a female Robinson Crusoe

– Have you got any plans for your next book that you can hint at or reveal?

– I’ve finished–and hope to publish in 2023 – my next novel, a female Robinson Crusoe set in the starving time during the first awful winter at Jamestown in 1609. It is very, very loosely – in terms of thematic obsessions – a sister to Matrix.

Meet Lauren Groff in Sweden! She is a guest at Kulturhuset, Stockholm, 12th of October.
Matrix is published in Swedish by Bookmark on the 12th. of October.

FIONA VALPY – the author behind the bestseller The Dressmaker’s Gift