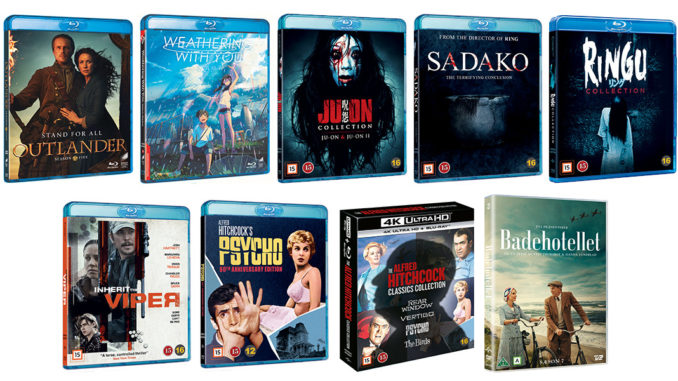 Sadako
A group of people must find out how to stop the newborn deadly curse, which has born and gone viral after a Youtuber accidentally captured a vengeful ghost on camera.
On Blu-ray & DVD Sep 7

Ju-On – I & II
The original and best, the horrifying saga of a curse born after the slaying of a woman, the revengeful soul returns.
On Blu-ray & DVD Sep 7

Psycho 60th Anniversary Edition
The extended version of the movie as seen in theaters in 1960 is exactly as intended by Alfred Hitchcock and now available with additional footage for the first time ever.
Also including the most widely seen version of the movie was edited for content and subsequently used for TV broadcasts, theatrical re-releases and home entertainment over the last 60 years.
On Blu-ray Sep 7

Outlander Season 5
The fifth season of Outlander sees a continuation of Claire and Jamie’s fight to protect those they love, as they navigate the trials and tribulations of life in colonial America.
On Blu-ray & DVD Sep 21

Inherit the Viper
Crime thriller about three siblings in Appalachia getting by as local opioid dealers, trying not to get caught in the spiral of violence that comes with the territory.
On Blu-ray & DVD Sep 21

Badehotellet Season 7
The seaside hotel “Badehotellet” in NW Denmark opens for its wealthy guests each summer. We follow the guests and staff at the hotel from 1928 and into the 1940s.
On Blu-ray & DVD Sep 21 (Only in Sweden, Denmark & Norway)

Ringu – The Collection
There is a rumor of a strange videotape. It is said that those who watch it will meet an untimely death – sooner rather than later. Watch the mysteries unfold, from the start to the curse’s last victim, in the movies that made Japanese horror the talk of the town. This collector’s boxed set features the original Ringu trilogy. Time to turn off the lights, and prepare for chills and goosebumps…
On Blu-ray & DVD Sep 21

Weathering With You
A high-school boy who has run away to Tokyo befriends a girl who appears to be able to manipulate the weather.
On Blu-ray & DVD Sep 28 (Sweden only)