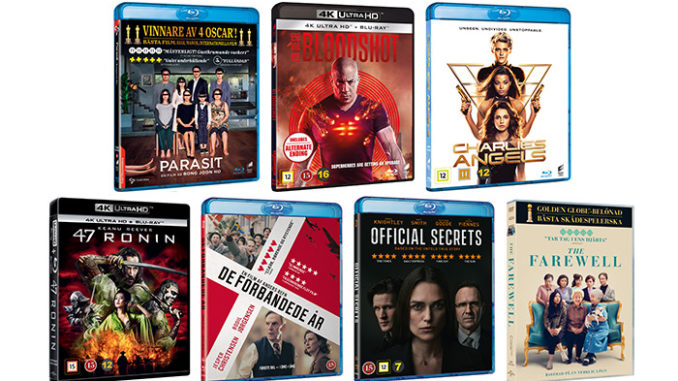 DE FORBANDEDE ÅR
Denmark, April 9th, 1940. Danish industrialist (portrayed by Jesper Christensen of James Bond fame) , cooperates and profits from the German occupation of Denmark. While his family finds themselves on opposite sides of the conflict.
On Blu-ray & DVD May 4 (Denmark only)

21 BRIDGES
An embattled NYPD detective is thrust into a citywide manhunt for a pair of cop killers after uncovering a massive and unexpected conspiracy.
On Blu-ray & DVD May 11

47 RONIN
A band of samurai set out to avenge the death and dishonor of their master at the hands of a ruthless shogun.
On 4K Ultra HD May 11

PARASITE
A poor family, the Kims, con their way into becoming the servants of a rich family, the Parks. But their easy life gets complicated when their deception is threatened with exposure.
On Blu-ray & DVD May 11 (Sweden only)

THE FAREWELL
A Chinese family discovers their grandmother has only a short while left to live and decide to keep her in the dark, scheduling a wedding to gather before she dies.
On DVD May 18 (Sweden only)

CHARLIE´S ANGELS
When a young systems engineer blows the whistle on a dangerous technology, Charlie’s Angels are called into action, putting their lives on the line to protect us all.
On Blu-ray & DVD May 18

OFFICIAL SECRETS
The true story of a British whistleblower who leaked information to the press about an illegal NSA spy operation designed to push the UN Security Council into sanctioning the 2003 invasion of Iraq.
On Blu-ray & DVD May 18