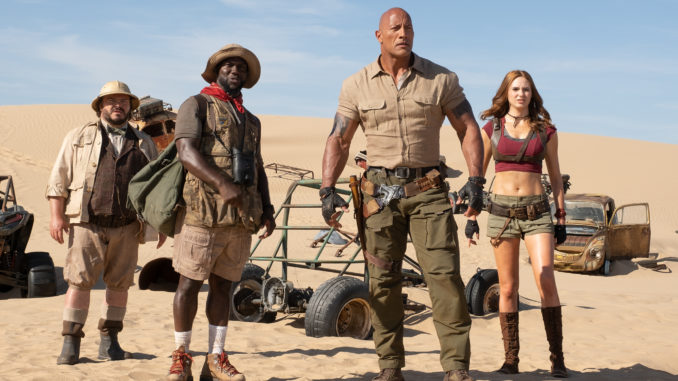 Helmed once again by Jumanji: Welcome to the Jungle director Jake Kasdan, JUMANJI: THE NEXT LEVEL, crossing over $700 million at the global box office, brings the fan-favorites back into the game, along with Jumanji newcomers Awkwafina (The Farewell), Rory McCann (TV’s “Game of Thrones”) with Danny Glover (Sorry to Bother You) and Danny DeVito (Dumbo).

JUMANJI: THE NEXT LEVEL catches up with Spencer (Alex Wolff), Fridge (Ser’Darius Blain), Martha (Morgan Turner) and Bethany (Madison Iseman) three years after their first adventure in Jumanji’s mystical video game world. When Spencer goes missing inside the game ahead of the group’s planned reunion from college, his friends, along with his grandfather (Danny DeVito) and his grandfather’s friend (Danny Glover), once again inhabit the avatars of Dr. Bravestone (Dwayne Johnson), “Mouse” Finbar (Kevin Hart), Professor Sheldon Oberon (Jack Black) and Ruby Roundhouse (Karen Gillan) to rescue him. As they return to Jumanji, they discover that nothing is as they expect. With more action and surprises, the players will have to brave parts unknown and unexplored, from the arid deserts to the snowy mountains, in order to escape.

The bonus materials for JUMANJI: THE NEXT LEVEL include a gag reel, several behind-the-scenes featurettes, in-depth scene breakdowns, a brand new jingle and more! The 4K Ultra HD, Blu-ray and DVD also include a fully interactive collectable map that employs Augmented Reality to bring Jumanji to life via smart phone. The experience provides up to ten minutes of game play and allows users to create their own 8-bit Avatar, navigate a series of mini games and much more!

BLU-RAY AND DIGITAL BONUS MATERIALS:
• Gag Reel
• “Rhys Darby Wants To Jingle”: How do you top Jack Black and Nick Jonas’s unforgettable theme song for the first one? Everyone’s favorite Non Player Character, Rhys Darby is ready to take it to the next, next level.
• “Body Swapping: Snapping Into Character”: “In the latest Jumanji adventure, the avatar roles are turned on their heads with new characters and hilarious performances.”
• “Back Together: Reuniting the Cast”: Dwayne Johnson, Kevin Hart, Karen Gillan and Jack Black are back and better than ever as they share their excitement to reunite.
• “Level Up: Making Jumanji: The Next Level”: From breathtaking scenery, wild adventure, new characters and more- go behind the scenes with the cast and crew as they take Jumanji to the Next Level.
• “Scene Breakdown: Ostrich Chase”: Jump in your dune buggy and go inside the epic ostrich chase scene as the filmmakers and visual effects team breakdown the creation of this memorable scene.
• “Scene Breakdown: Mandrill Bridges”: Moving rope bridges, giant mandrills and incredible stunt work make the mandrills attack one of the most adrenaline pack parts of this film.In this scene breakdown, see how they pulled it off.
• “Awkwafina Cat Burglar”: To prepare for her roles as pick pocket, Ming Fleetwood, superstar Awkwafina got a little too method behind the scenes.
• “NPC Confessions: Jurgen The Brutal”: Being the bad guy isn’t all glory.Jurgen The Brutal gets real in this candid confessional.
• “Grow Up:” Danny DeVito and Danny Glover help Dwayne Johnson and Kevin Hart get in touch with their inner grumpy old men.
• “Telenovela”: Kevin Hart gets lost in translation in this melodramatic promo.
• “VFX Pre-Vis: Zeppelin Battle”: Compare the detail of the visual effects pre visualization reel and the final picture breakdown of the thrilling Zeppelin battle.
• “VFX Pre-Vis: Ostrich Chase”: Track the progression from pre-visualization to finished scene in a side by side comparison of the ostrich chase.
• AR GAME: The 4K UHD, Blu-ray and DVD include a collectable map that is fully interactive, employing Augmented Reality to bring Jumanji to life through a smart phone, allowing users to create their own 8-bit Avatar, navigate a series of mini games and much more!

DVD BONUS MATERIALS:
• “Body Swapping: Snapping Into Character”
• “Back Together: Reuniting the Cast”
• “Level Up: Making Jumanji: The Next Level”

GAME OF THRONES IN CONCERT till Malmö Arena i februari 2020!