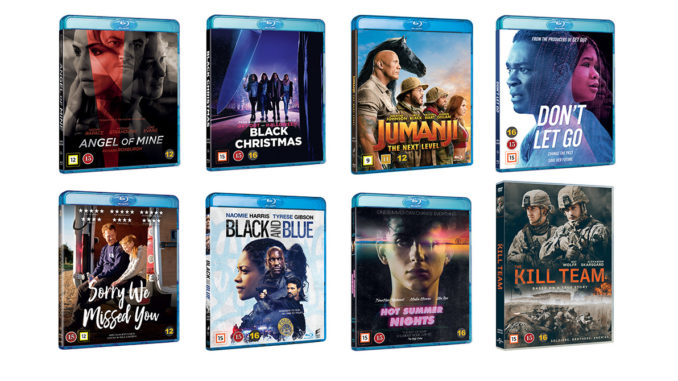 ANGEL OF MINE
A woman grieving over the death of her daughter loses grip of reality when she begins to think her girl may still be alive.
On Blu-ray & DVD April 6

THE KILL TEAM
A young American soldier in Afghanistan is disturbed by his commanding officer’s behavior and is faced with a moral dilemma.
On DVD April 6

JUMANJI: THE NEXT LEVEL
In Jumanji: The Next Level, the gang is back but the game has changed. As they return to rescue one of their own, the players will have to brave parts unknown from arid deserts to snowy mountains, to escape the world’s most dangerous game.
On Blu-ray, DVD & 4K Ultra HD April 20

DON’T LET GO
After a man’s family dies in what appears to be a murder, he gets a phone call from one of the dead, his niece. He’s not sure if she’s a ghost or if he’s going mad, but as it turns out, he’s not.
On Blu-ray & DVD April 20

HOT SUMMER NIGHTS
In the summer of 1991, a sheltered teenage boy comes of age during a wild summer he spends in Cape Cod getting rich from selling pot to gangsters, falling in love for the first time, partying and eventually realizing that he is in over his head.
On Blu-ray & DVD April 20

BLACK CHRISTMAS
A group of female students are stalked by a stranger during their Christmas break. That is until the young sorority pledges discover that the killer is part of an underground college conspiracy.
On Blu-ray & DVD April 27

BLACK AND BLUE
A rookie New Orleans police officer is forced to balance her identity as a black woman after she witnesses two corrupt cops committing murder.
On Blu-ray & DVD April 27

SORRY WE MISSED YOU
Hoping that self-employment through gig economy can solve their financial woes, a hard-up UK delivery driver and his wife struggling to raise a family end up trapped in the vicious circle of this modern-day form of labour exploitation.
On Blu-ray & DVD April 27