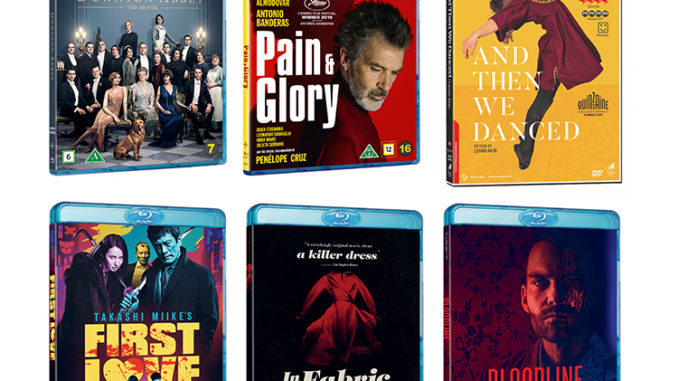 DOWNTON ABBEY
The continuing story of the Crawley family, wealthy owners of a large estate in the English countryside in the early twentieth century.
On Blu-ray & DVD February 3rd

PAIN AND GLORY
A film director reflects on the choices he’s made in life as past and present come crashing down around him.
On Blu-ray & DVD February 10th

AND THEN WE DANCED
A passionate coming-of-age tale set amidst the conservative confines of modern Tbilisi, the film follows Merab, a competitive dancer who is thrown off balance by the arrival of Irakli, a fellow male dancer with a rebellious streak.
On DVD February 10th (Sweden Only)

BLOODLINE
Evan values family above all else, and anyone who gets between him, his wife, and newborn son learns that the hard way. But when it comes to violent tendencies, it seems the apple doesn’t fall far from the tree.
On Blu-ray & DVD February 10th

IN FABRIC
In Fabric is a haunting ghost story set against the backdrop of a busy winter sales period in a department store and follows the life of a cursed dress as it passes from person to person, with devastating consequences..
On Blu-ray & DVD February 24th

FIRST LOVE
A young boxer and a call girl get caught up in a drug-smuggling scheme over the course of one night in Tokyo.
On Blu-ray & DVD February 24th