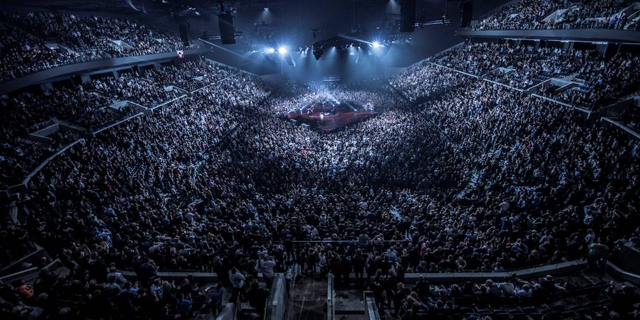 The 16,500-capacity Arena has had an incredible year with international stars like Depeche Mode, Kendrick Lamar, Sam Smith, Justin Timberlake, U2, Bon Iver and Paul McCartney on the bill. The venue opened with a trilogy of sold-out Metallica shows and events have continued ever since.

Dan Hammer, CEO of Royal Arena, says: “The numbers speak for themselves. However, the credit should go to the extremely talented Danish organisers, who work hard each day to attract musical mega stars and major sporting events to Copenhagen and Royal Arena. Their efforts are world-class.

“The Ice Hockey World Championship in May was a unique, profitable experience for both the city and the arena, but such events do not come to Denmark by themselves. I am sure that the event will serve as a positive example of the fact that it pays to invest resources and finances in attracting experience-driven customers.

“One of the keys to our success is an extremely varied programme with many different music genres, traditional sports, e-sports, stand-up and amazing shows. I am particularly pleased that we have attracted highly coveted Danish names such as Nephew, Anden and Lukas Graham on the programme.”

The Danish business community has also given the arena a warm welcome, with a total of 125 companies currently members of the Audi Club, which is Royal Arena’s commercial network.

“We are very grateful for the support of the business community. With the exception of a brand new exclusive partnership with just nine members, we have no more commercial VIP packages to offer for the next year. We have quite simply sold out,” adds Dan Hammer.

MUSE världsturné till Köpenhamn i höst