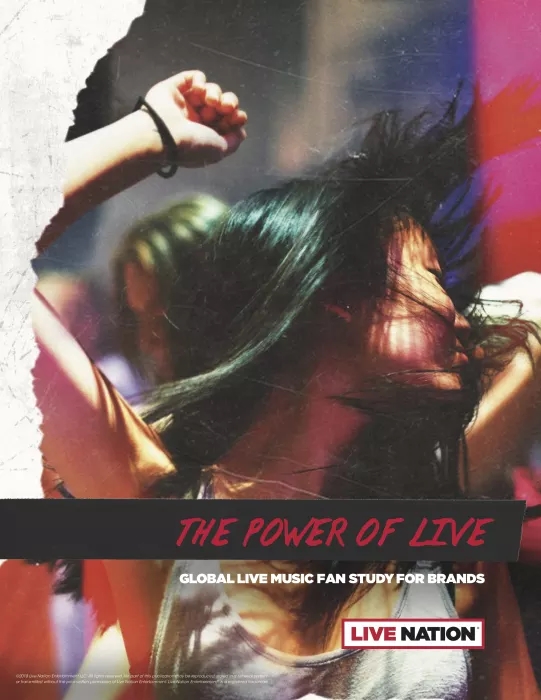 Live Nation, the world’s leading live entertainment company released findings today from The Power of Live, a global study that captured trends and behaviors of 22,500 live music fans, from 11 countries, ranging ages 13 to 65. Conducted in partnership with research agency Culture Co-op, the findings revealed that in today’s digital age, live music is more necessary than ever and creates the ultimate human connection.

Live music is the antidote. 71% of participants agree that the moments that give them the most life are live music experiences.

Key takeaways from “The Power of Live” study include:

In today’s fractured world, live music is more important as a unifying force than ever before.

When asked what defines them most as a person, respondents said music drives identity more than their hometown, politics, race or religion. The only things that are a bigger force than music are friends/family and pastimes.

Live music is in high demand. The study reported 2/3rds of Gen X, Y and Z (spanning ages 13-49) go to at least one concert or festival a year, with a majority of those that attend going to multiple events. Live Nation sees this growing demand reflected in the sheer number of fans coming out to concerts and festivals, with event attendance jumping to 86 million in 2017, a 21% increase from the prior year.

Live music facilitates bonding and instantly increases your mood. Proven through a biometric experiment that studied fans in their element at a live concert, nearly 70% of participants showed significant synchronization of body movements which served as a proxy for oxytocin, the hormone that facilitates bonding and human connection. And the feeling is lasting – even after the encore participants had a mood increase of 5X compared to how they felt before the show.

The emotional intensity of live music opens the mind to new ideas. 67% of global audiences say the more emotionally engaged they are, the more open they are to new ideas. In fact, 90% said brands are welcome in the space as long as they find authentic ways to enhance their experience.

Globally, concertgoers are 29% more affluent, 4X more likely to be micro-influencers (defined as having at least 1,000 followers on social channels) and are +121% more likely to say they are highly influential among peers.

– Fans will travel for live: 72% of Gen Z/ Millennials have driven over 100 miles to attend a live music event.

– Fans are Tech Savvy: 71% of live music fans say their inner circle comes to them with questions around devices and tech products.

To delve deeper into Live Nation’s The Power of Live study, download the white paper at: www.livenationsponsorship.com/international