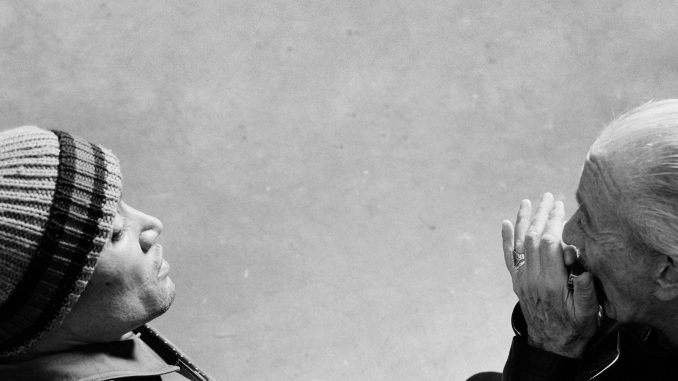 GRAMMY-Award winning, multiplatinum-selling artists BEN HARPER and CHARLIE MUSSELWHITE will collaborate once again for their new album “No Mercy in This Land”, due out March 30, 2018. “No Mercy in This Land” is the first of new music from the pair since the 2013 release of their collaborative album “Get Up!”, which debuted at No. 1 on Billboard’s Blues Albums Chart and won a GRAMMY Award in 2014 for “Best Blues Album.” A musical expression of the kinship between the two, the album recounts both Ben and Charlie’s personal stories and adds to the sonic history of American struggle and survival.

“Charlie Musselwhite is that very rare and hallowed place where blues past, present and future collide,” says Ben about his collaborator and friend. “He transforms notes into emotions that feel both hauntingly familiar and brand new, as if hearing them for the first time every time. He is a living legend whose harmonica playing should be beamed into outer space to search for other life forms.”

“On stage or in the studio – working with Ben Harper holds the same excitement I experienced working with Chicago blues legends back in the day,” says Charlie. “I think it is safe to say that Ben has reinvented the Blues in a great way: playing modern while preserving the feel. I am honored and privileged to be a participant in this project.”

Ben and Charlie will celebrate the album’s release on March 30th by kicking off an international tour that same evening in San Francisco, CA at the famed Fillmore before heading overseas for a string of European dates. The duo will make their return to States in May with two nights at Los Angeles’ Troubadour followed by a summer’s worth of shows across North America.