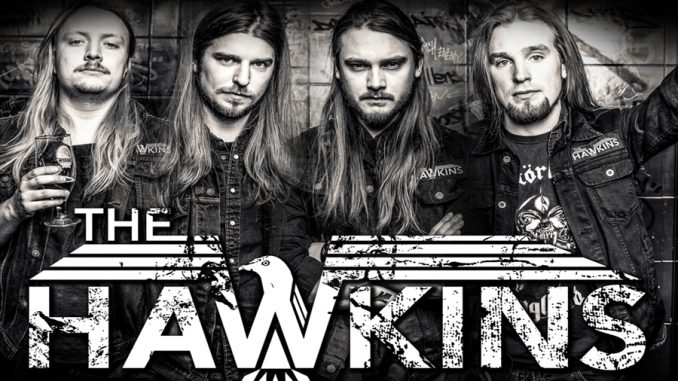 The Hawkins joins Corroded on the ”Fall of Nations” Tour in Feb/March!

Mid February, it’s time for The Hawkins to hit the road again. This time around, no less than six countries are included as the young Swedish up-and-coming rock band join Corroded on their ”Fall of Nations” tour.
– I’m really looking forward to this tour, says singer/guitarist Johannes Carlsson. Tours like these are what I live for, partially. Excited to show Europe (the continent, not the band) our new album by playing some fingerlicking tunes. I’m also really looking forward to play with Corroded and get to know those guys better.”

Stockholm and Gothenburg are the only two Swedish cities that get a chance at experiencing these two bands before the tour heads over to Copenhagen, Denmark.
– I’m damn stoked about this tour, says The Hawkins guitar player Mikael Thunborg. To go abroad again for a longer journey and share the stage with the mighty guys in Corroded is a huge milestone for us. We will make sure that everyone on this tour will be infected with the Hawk Flu. Beers, jump kicks and a lot of good times are laying ahead. I can’t wait to get going!

According to reports, some of the shows in Germany are pretty much sold out already, and Patrik Ekelöf, manager for The Hawkins is not surprised.
– Corroded has toured Europe several times before and we are extremely thankful that they chose The Hawkins to be their support act. We all feel that it will be a great match, where fans of both bands will be able to get an extra dose of hard and heavy rock as a bonus. I am sure this tour will be one for the books!

The Hawkins debut album ”Ain’t Rock n Roll” (Gain/SONY) has been praised by music journalists all over Europe and the effects of the debut album has been noticed.
– We have been in touch with numerous bookers all over Europe, says manager Patrik Ekelöf. Now they will get something, way better than me sending out press releases and video links. They will get to experience this band where they belong: on stage. Seeing is believing. 2017 ended in the perfect way with the tour of Latvia, and this tour with Corroded is the best way to warm up for what awaits in the summer, when we have a tour in June to be announced later, covering some countries never played in before. But first of all we look forward to tour the two biggest citities of Sweden and Denmark, Austria, Switzerland, France and, last, but not least: Germany!