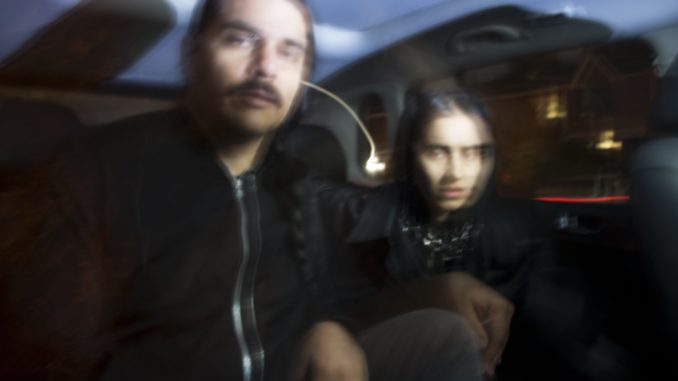 New York City has had a long history of dance music fused with confrontational performance. Whether it came from within the late 70’s No Wave canon projected through venues like the Mudd Club or the downtown avant-garde galleries such as The Kitchen, the feeling that influences and infects Brooklyn-based duo Wetware’s overall being as a cohesive and confrontational unit is as much enigmatic as it is familiar.
Formed in 2015, Wetware eased into its performative role with their live shows around their home base of Brooklyn, NY. Vocalist Roxy Farman, who’s familiar voice was last heard on Drew McDowall’s Unnatural Channel album, stole audience’s attention immediately, using her body in tandem with her voice as a weaponized vehicle for the band’s anxiety filled performance. Matthew Morandi cut his teeth in the electronic music world through his solo tech-industrial project Jahiliyya Fields and partner to Inhalants, the techno collaboration of Morandi and Max Ravitz (Patricia). The synergy that’s developed between Farman and Morandi has been explosive. Wetware’s live antics and behavior has caused alarm amongst their local audiences, making Wetware the group to “not be missed” on any particular bill that they are allowed to take part in.

Wetware stepped out from their live persona and self-recorded a selection of songs that viewers had grown accustomed to and were debuted on the flawlessly curated Primitive Languages imprint. Shortly following their recorded premier was an EP collection of demo recordings on the much praised Bank NYC label. Once the band reconciled with documenting their work, they set out, with the help of engineer Kris Lapke (Alberich / Hospital Productions) to formalize their most recent output in the context of their first full length album entitled Automatic Drawing.

Given Wetware’s penchant for endurance, as displayed by their 3 hour long production at Koenig & Clinton Gallery in the Summer of 2017, one would expect the usual restlessness on Wetware’s debut full length. All of the apprehension and unease in Wetware seems to have been channeled into a string of cohesive electronic statements found on songs “Frequent Dreamlands” and “Ode to Joe”. Industrial dance rhythms bounce around Farman’s poetic stance on “Where Ever You Were”, causing flashbacks of an early 80’s dystopia that jumps around a confusing, uncomfortable backdrop. Interspliced with modular electronic instrumentals like the album’s opener “Pantomime”, Wetware’s devastating portrait is that of a society in peril.

Wetware’s debut album, Automatic Drawing, is released on Dais Records on February 9, 2018 in both vinyl and digital formats. Listen to the first single “Frequent Dreamlands” and find album details below!

Wetware – Automatic Drawing
1. Pantomime
2. Hand Over Mouth
3. Likewise
4. Ode To Joe
5. Act On My Behalf
6. Except All Presents
7. Where Ever You Were
8. The Luxury Of Declining
9. Frequent Dreamlands