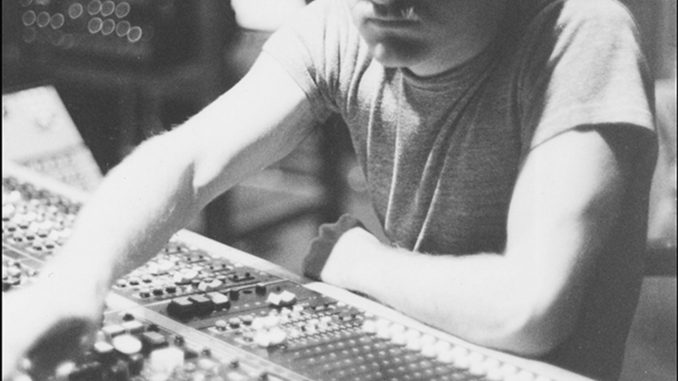 Dark Entries and Honey Soundsystem Records have teamed up once more to release the final volume of gay porn soundtracks by San Francisco-based musician and producer, Patrick Cowley. One of the most revolutionary and influential figures in the canon of disco, Cowley created his own brand of Hi-NRG dance music, “The San Francisco Sound.” Born in Buffalo, NY on October 19, 1950, Patrick moved to San Francisco in 1971 to study at the City College of San Francisco. He founded the Electronic Music Lab at the school, where he would make experimental soundtracks by blending various types of music and adapting them to the synthesizer.

By the mid-70’s, Patrick’s synthesis techniques landed him a job composing and producing songs for disco superstar Sylvester, including hits like “You Make Me Feel (Mighty Real)”, “Dance Disco Heat” and “Stars.” This helped Patrick obtain more work as a remixer and producer. His 18-minute long remix of Donna Summer’s “I Feel Love” and his production work with edgy New Wave band Indoor Life were both of particular note. By 1981, Patrick had released a string of dance 12″ singles, like “Menergy” and “Megatron Man”. He also had founded Megatone Records, the label upon which he released his debut album, “Menergy”. Around this time Patrick was hospitalized and diagnosed with an unknown illness: that which would later be called AIDS. Throughout 1982, he recorded two more Hi-NRG hits, “Do You Wanna Funk” for Sylvester, and “Right On Target” for Paul Parker, as well as a second solo album “Mind Warp”. On November 12, 1982, he passed away.

In 1979 Patrick was contacted by John Coletti, owner of famed gay porn company Fox Studio in Los Angeles. Patrick jumped on this offer and sent reels of his college compositions from the 70s to John in LA. Coletti then used a variable speed oscillator to adjust the pitch and speed of Patrick’s songs in-sync with the film scenes. The result was the VHS collections “Muscle Up” and “School Daze” released in 1979 and 1980. “Afternooners” is the third collection of Cowley’s instrumental songs, recorded in May 1982. These recordings were culled from two 23-minute reels in the Fox Studio vaults. This compilation also includes three bonus tracks found in the archives of fellow Megatone Records recording artist Paul Parker and the attic of teenage friend Lily Bartels. Influenced by Tomita, Wendy Carlos, and Giorgio Moroder, Patrick crafted a singular sound from his collection of synthesizers, percussion, modified guitars, and hand-built equipment. The listener enters a world of forbidden vices, evocative of Patrick’s time spent in the bathhouses of San Francisco. The songs on “Afternooners” reflect the advances of the equipment available at the onset of the 1980s. Cowley’s unadulterated electronic forms are stripped down and dubbed up. Lush electronic percussion, soaring synthesizer riffs and low slung funk grooves comingle on these magnificent soundscapes.

Featuring 70 minutes of music never before released on vinyl. All songs have been remastered by George Horn at Fantasy Studios in Berkeley, CA. The vinyl is housed in a gatefold jacket designed by Berlin-based artist Gwenael Rattke, featuring black and white photos of Patrick in his studio that opens to a full color array of x-rated scenes from the Fox Studio vaults. Included is a fold-out poster featuring a handmade collage using photography and xeroxed graphics of classic gay porn imagery and an essay from Drew Daniel of Matmos. For Patrick’s 67th birthday, Dark Entries and Honey Soundsystem Records present a glimpse into the futuristic world of a young genius. These recordings shed a new light on the experimental side of a disco legend who was taken too soon.

There will be a celebration of Cowley’s life and work on November 9th at CounterPulse in San Francisco with performances by Group Rhoda and Jorge Socarras, and talks from John Coletti (Fox Studio), Theresa McGinley (Angels of Light), & Chris Njirich (Remember the Party) as well as screenings of original 16mm films from the Fox Studio Archives.