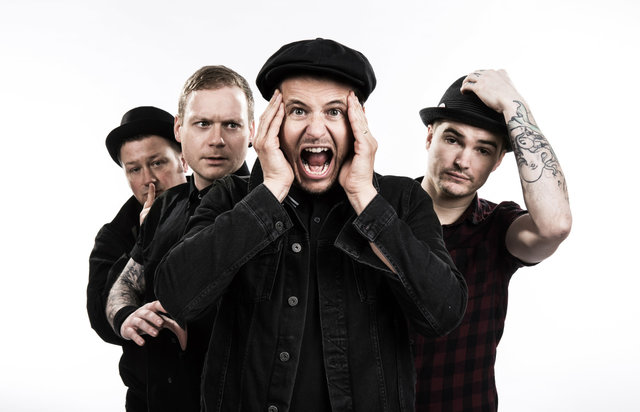 BUSTER SHUFFLE have announced that after signing to Burning Heart Records they are gearing up to release brand new material soon. Starting with a new single “I Don’t Trust A Word You Say” (backed with “Pretty Boy”) worldwide on September 15, 2017

The Orebro based label who also just signed Guida and Booze & Glory have a great pedigree that includes introducing the world to such as The Hives, Parkway Drive, Turbonegro, Refused, The (international) Noise Conspiracy and Millencolin among many others.

A launch party for the new single “I Don’t Trust A Word You Say” will happen in Seattle on their US tour this September, which closes with a date at the infamous Viper Rooms in Los Angeles. The band then flies back via a headline show in Mexico City returning to the U.K. for a homecoming single launch party in the heart of London in early October. Full details to follow

Following the release of their last album ‘Naked’ (People Like You 2014) BUSTER SHUFFLE have spent a successful two years of heavy touring with the likes of Flogging Molly, Hepcat and many other punk and Ska dignitaries. The last few years have seen the band rise through the ranks of the European Ska and punk scene and ‘I’ll take what I want with its heavy ska / punk influence, grey British overtones and stripped back kicking four piece line up is set to project the band even further.

BUSTER SHUFFLE are gearing up to ramp it up with a host of impending activity still to be announced. Trust Every Word We Say!!

Take my word for it, they’re rockin – THE SUN Bizarre
One to watch 4* – UNCUT
You’ll enjoy this knees-up – THE GUARDIAN
A verve and feel for the ska foundations laid by early Specials and Madness – THE DAILY MIRROR
Piano-bashing Cockney ska – THE TIMES