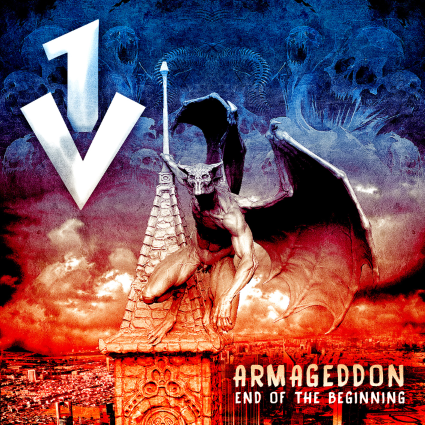 V1 is a band that you need to know. With an impressive pedigree involving a shared history with a certain band named Iron Maiden, V1 is a rock ‘n’ roll supernova coupling an incendiary hard-rock sound with rabble-rousing showmanship.
Formed by former Iron Maiden men Dennis Willcock (vocals/frontman) and Terry Wapram (guitars) in 1978, V1 is the only band to date able to claim it poached a singer from Iron Maiden!

V1 now re-emerges with a blazing new line-up, rolling back the years with a veritable blitzkrieg of hard rocking buzz bombs. From call-to-arms opener ‘V1 Rocket’ to the bombastic and progressive finale ‘Armageddon’, the legendary V1 catalogue has finally been recorded and mixed to album quality. Their objective, to get the music out to the fans around the world longing to hear it: “We want to take the band where it should have got to first time round. The songs deserve to be heard – each one has a real story attached. We stay true to the origins but of course bring them into the now. It is a real pleasure to revisit the songs from 1978 and fully develop and record with all the experience gained in the intervening years.” Terry Wapram, Guitarist

‘Armageddon: End of The Beginning’ is an album of melodic hard rock and killer riffs,70s/80s metal and epic song structures. A crystal clear mix and contemporary production give these modern recordings a razor edge.
It is a certainty that there will always be interest in V1 due to their NWOBHM heritage, particularly their place in the Iron Maiden family tree. But listen to this album and you are sure to agree ‘Armagedon….’ proves V1 to be a killer band in its own right.

Dennis Willcock (lead vocals): Frontman and chief rabble-rouser Dennis started his singing career way back in 1963 and his first fully functional band went by the name Bearded Lady. By 1974 Dennis had joined the respected London rockers Smiler alongside a young Steve Harris, and it was at this point in time that things really got going. A short stint with supersonic turbo-rockers Nitro followed, before Dennis committed to the nascent Iron Maiden, fronting the band through the mid/late 1970s as they built up a solid following and developed their repertoire. Leaving Iron Maiden to work with Terry Wapram in V1, Dennis was a main player in the London rock scene during the late 1970s and the turn of the 1980s, as his bands V1 and Gibraltar ruled the Ruskin Arms and beyond. A true showman and solid gold entertainer, his every performance is characterized with energy and conviction.

Terry Wapram (guitars): founder member of V1, and a gifted and versatile guitarist with the ability to switch effortlessly and with great velocity between understated rhythm playing and blistering lead guitar. Terry can sound like two or three different guitarists within the same song and his guitar pyrotechnics are an important ingredient in the dynamic V1 sound. Scouted by Dennis whilst playing London’s famed Marquee Club in the mid-1970s, as guitarist with the sleazily named Hooker, Terry was an obvious choice as axe-man for Iron Maiden during their formative ‘1 guitar + keyboards’ phase as they experimented away from the twin guitar sound. After ‘Maiden, Terry quickly assembled V1, the only band in the history of rock that can claim they were good enough to lure away a lead singer from Iron Maiden! In recent years Terry has played in a number of bands including Space Chickens with former ‘Maiden drummer Ron Rebel, and more recently with Buffalo Fish alongside V1 bass player Dwight Wharton. A highly respected guitarist, Terry Wapram always delivers.

Dwight Wharton (bass guitars) hails from Virginia in the USA, bringing an international dimension to the new-look V1. A true musician, Dwight began the long road to mastering his craft at the age of 11. A few years at university were formative to his development and it was not long until he became an in-demand session musician on the US East Coast, before setting sights on the British music scene. More session work followed but it was upon meeting Terry Wapram and forming Buffalo Fish that Dwight believed his own style was truly noted. Finding frequencies lower than a rattlesnake’s belly, Dwight was the obvious choice to provide the bass in the revamped V1 and take the music forward into the 21st century.

Gareth Dylan Smith (drums & percussion) cut his hard rocking teeth playing loud and fast with some of the best amongst London’s dark underbelly, touring extensively and recording several critically acclaimed albums along the way. Having often had the sense that he was born 30 years late for the music he was destined to play, when the opportunity presented itself to drum in V1, Gareth jumped at the chance to work with such an explosive and influential band.

A distinctive and hard-hitting drummer, Gareth can play like a hurricane and often does, but dig beneath the surface and you’ll find capabilities above and beyond the usual ‘animal from the muppets’ hard-rock drummer cliché: Gareth is a classically trained musician, a versatile team player with song-writing flair, belting backing-vocals……and a PhD in the Sociology of Music and Music Education. He’s even authored an authoritative book about drummers, and as a writer has also contributed to music encyclopedias, and to magazines such as Rolling Stone and Rhythm. The renaissance man of drumming, Gareth’s thunderous beats, freight train tempos, are guaranteed to ‘rock your house down’!
Gareth’s ambitions with V1 are to “bring to life the awesome demos that were recorded in 1978. I wasn’t there for the original demo recordings, so I want to be true to those ideas while bringing whatever contemporary thing I have to the table as well. Honestly, V1 is the perfect band for me – I love the music, the attitude and the guys. It’s a proper rock band playing proper rock music and making no apologies for it. Rock on.”