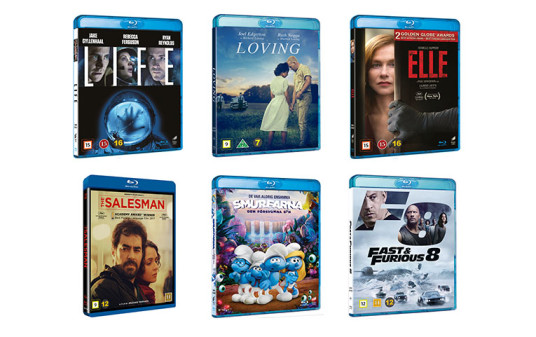 LIFE
Life is a sci-fi thriller about an International Space crew whose mission turns to one of primal fear after discovering a terrifying life form.
On 4K Ultra HD, Blu-ray & DVD August 7

LOVING
The story of Richard and Mildred Loving, a couple whose arrest for interracial marriage in 1960s Virginia began a legal battle that would end with the Supreme Court’s historic 1967 decision.
On Blu-ray & DVD August 14

ELLE
Verhoeven’s critically acclaimed thriller about a businesswoman (Isabelle Huppert) attacked in her home by an unknown assailant.
Isabelle Huppert was nominated for an Oscar for Best Performance by an Actress in a Leading Role.
On Blu-ray & DVD August 14

SMURFS: THE LOST VILLAGE
In this fully animated, all-new take on the Smurfs, a mysterious map sets Smurfette and her best friends Brainy, Clumsy and Hefty on an exciting and thrilling race through the Forbidden Forest filled with magical creatures to find a mysterious lost village before the evil wizard Gargamel does. Embarking on a roller coaster journey full of action and danger, the Smurfs are on a course that leads to the discovery of THE biggest secret in Smurf history!
On 4K Ultra HD, Blu-ray, Blu-ray 3D & DVD August 21

THE SALESMAN
While both participating in a production of “Death of a Salesman,” a teacher’s wife is assaulted in her new home, which leaves him determined to find the perpetrator over his wife’s traumatized objections.
“Gripping” – ROLLING STONE
“An expertly made suspenseful film” – VILLAGE VOICE
On Blu-ray & DVD August 21

FAST & FURIOUS 8
When a mysterious woman seduces Dom into the world of terrorism and a betrayal of those closest to him, the crew face trials that will test them as never before.
“Holy motors! Excuse me while I catch my breath. This is perhaps the fastest and, if not, certainly the most furious of the Fast & Furious movies.” – VILLAGE VOICE
“A dazzling action spectacle that proves this franchise is far from out of gas.” – VARIETY
On 4K Ultra HD, Blu-ray & DVD August 28