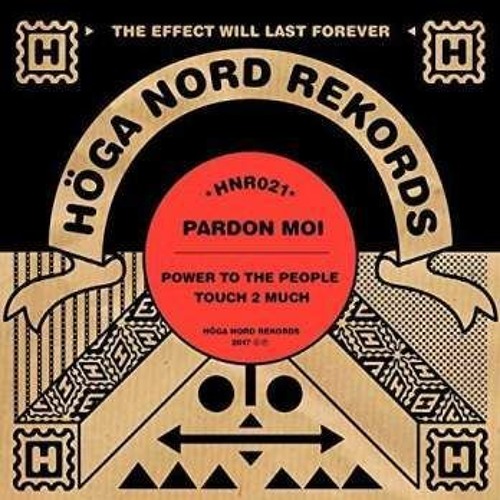 Berlin based Pardon Moi, consisting of James Brook and Thomas Freudenthal, makes music that would fit perfect as a soundtrack for a ride in a Ferrari GTO convertible, or on a transatlantic flight on a Concorde. Unfortunately, vintage Ferraris are ridiculously expensive and Concords are taken out of flight but still the music creates an air of luxury and decadence for you to fill your lungs and air with.

This 7” release on Höga Nord Rekords is the first on the label but the duo have released material on Nein Records and Vocoder Electro.

Pardon Moi’s sound is warm, creative, uplifting and retro thanks to the use of analogue synthesisers. These take on a big role on both tracks, Power To The People/Touch 2 Much. Electro, synth pop, and electronic disco has influenced the duo’s sound on this 7”. The musical direction is toward the future ,to a utopia built on a world where the 90s never happened. This is retro futuristic dance music, but the music don’t stop with being only nostalgic but holds qualities that would make any actor within any scene of modern electronic dance music envy.
Listen to the sound of a million bucks never spend. Save your money and travel cheap yet classy with Höga Nord Rekords and Pardon Moi!