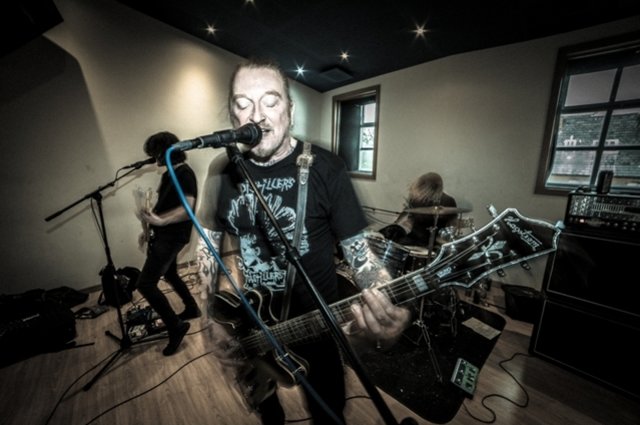 While MUTATION has been called “the manifestation of all the horrible stuff that goes on in Ginger’s head,” the most extreme moments on those first two records sound like David Essex’s “Hold Me Close” compared to the seething, mentally shattered insanity of Mutation III: Dark Black. This is a ridiculously extreme, obnoxious and hostile piece of work. It’s an exorcism, a venting of malevolent spirits and mental exhaustion. But it’s also an extraordinary piece of art and one of the most obscenely exciting bursts of freewheeling, kamikaze noise that you will ever hear. Absorb the music video for MUTATION’s “Irritant” here: http://www.metalinjection.net/video/throw-a-house-party-and-destroy-the-place-with-mutations-hate

“Generally speaking, these songs tackle issues that we’re still processing ourselves,” says Ginger. “Anger, disgust in people, frustration at the collapse of human conscience and hatred of the gullible element that makes up society. Basically, wanting to kill but being unable to, due to the strict penalties involved. In Mutation, we are able to vent these feelings and no one can tell us that it’s too fucked up. They can only tell us that we’re too fucked up, which we already know, and have the prescriptions to prove it.”

Ginger Wildheart is available to speak with interested media. To chat with Ginger and / or request a review copy of Mutation III: Dark Black, simply contact Andy Turner or Will Palmer

“A vivacious post-grindcore melting pot… exactly the kind of deranged and barely-precedented opus that the world needs right now.” – THE QUIETUS

“”More cooks don’t spoil the broth — in this case, they just add to its flavor. Though it’s an acquired taste, it’s one that satisfies…one strange, exciting beast”” – VERBICIDE