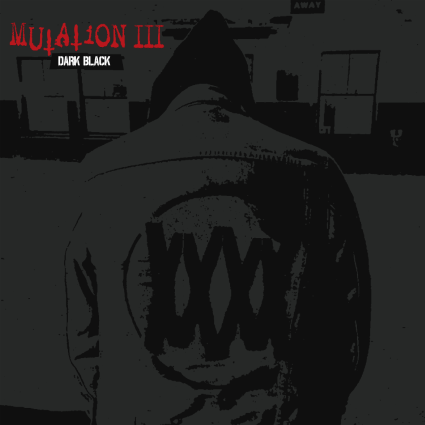 What do you do when everything goes to shit? Not normal, mundane, day-to-day shit, but AAAARRRGGGHHHH KILL EVERYBODY AND START WITH ME shit. Depression, anxiety, misery, torment, whatever you want to call it. It needs a name and it needs a soundtrack. Welcome to Mutation III: Dark Black.

Mutation began as the deformed brainchild of Ginger Wildheart, one of British rock’s official living legends and the man behind The Wildhearts, Hey! Hello! and all manner of wildly tuneful and uplifting rock’n’roll shenanigans. This band is different, however. This band is the manifestation of all the horrible stuff that goes on in Ginger’s head. As a result, the first two Mutation albums were laborious in their creation but mind-blowing to all those who heard the: 2013’s ‘The Frankenstein Effect’ was like a Wildhearts album recorded by PCP-guzzling baboons, while ‘Error 500’ was a relentless barrage of squawking, screeching, glitched-to-fuck wrongness. Both featured an ignominious cast of characters that Ginger assembled to facilitate his sonic meltdown, with everyone from Napalm Death and Japanoise icon Merzbow to The Fall’s Mark E. Smith chipping in some wonky nuggets of aural sickness. But even the most extreme moments on the first two Mutation records sound like David Essex’s Hold Me Close compared to the foul, seething, mentally shattered insanity of ‘Mutation III: Dark Black’. A collaboration between Ginger and Scott Lee Andrews of Welsh bass-punk wretches Exit International, /this/ time the madness is very, very real.

“We’re professionally diagnosed sufferers of various mental health problems,” says Ginger. “Seriously. I think in this case it comes as a blessing, as we have no idea what responsible extremes are. The album almost didn’t happen. Scott came to write and demo with me in my caravan. I was going through a severe bout of depression, and told him that this writing session probably wouldn’t happen. He said ‘I’m feeling pretty fucked myself, let’s just see how the evening goes…’ We got drunk and started to come up with ideas. Scott used a brilliant phrase, during the inception of this album, when he mentioned ‘going method’. In Mutation, we are able to ‘go method’ and no-one can tell us that it’s too fucked up. They can only tell us that we’re too fucked up… which we already know, and have the prescriptions to prove it.”

“We survived each other’s company by committing the ideas down and trying to then sonically sabotage anything that sounded too ‘safe’ as a perverse experiment in aural self-destruction,” adds Scott. “We spent the rest of the time cleaning up an invisible mess in the caravan that we’d made. It must’ve looked like a cross between One Flew Over The Cuckoo’s Nest and Kim and Aggie from How Clean Is Your House?”

As messy, unpleasant and unhinged as the writing process for Mutation III: Dark Black was, the end results were manifestly worth the wait. Once again, the album boasts a dazzling array of guest contributions from a great number of similarly demented human beings, including prog metal superstar Devin Townsend, Phil Campbell from Motörhead, Arthur Shepherd of Primitive Weapons, ex-Cardiacs fruitloop Random Jon Poole, Jamie Oliver of UK Subs, Mauro Pawlowski (ex-dEUS) and the mighty Paul Catten (Barrabas, Bed Wetter, Stuntcock, The Sontaran Experiment, ex-Medulla Nocte etc etc). With backing vocals from long-time Ginger comrade Givvi Flynn and various other bug-eyed weirdos thrown in for good measure, the bewildering, mutoid riff carpet-bombing that erupts throughout the album’s deceptively hook-laden barrage is so dense, intense and extreme that it seems to an exerts an almost gravitational pull. From the sing-along hate-spew of Irritant and the synth-pissing jerk’n’roll of opener Authenticity to the balls-out death metal detonations of Toxins and the collapsed-lung descent-into-oblivion of the closing Deterioration is all wrong, all of the time.

“Generally speaking, the songs tackle issues that we’re still processing ourselves,” says Ginger. “Anger, disgust in people, frustration at the collapse of human conscience and hatred of the gullible element that makes up society. Basically, wanting to kill but being unable to, due to the strict penalties involved.”

“Once it reached the mixing stage, it all made sense as it started to sound how the inside of my head gets sometimes,” says Scott. “Then there was the inevitable ‘Who the fuck is going to find any joy in listening to this?’ period, which is probably not a great way to celebrate the completion of an album. Without pretension, to me, this album genuinely bottled a part of us both. It could be seen to attempt an aural exorcism of two people’s combined life-threatening psychological disorders. That said, people have come forth with almost confessional messages of support in how the record has captured something for them.”

Therein lies the bleak magic of ‘Mutation III: Dark Black’. This is a ridiculously extreme, obnoxious and hostile piece of work. It’s an exorcism, a venting, an uproarious vomiting of malevolent spirits and mental exhaustion. But it’s also an extraordinary piece of art and one of the most obscenely exciting bursts of freewheeling, kamikaze noise that you will ever hear. Ultimately, Mutation III: Dark Black sends up a badly scrawled but brightly lit Bat Signal into the sky, to let everyone know that when everything goes to shit, we will never plunge into the abyss without making a lot of fucking noise. Now fuck off.