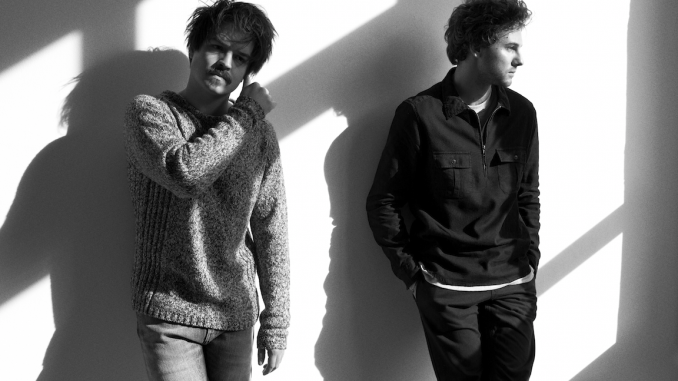 With their sophomore album “Blossom,” the musical duo Milky Chance from Kassel has surpassed the incredible international success of their debut. The infectious title track “Blossom” has now been released as the second single from the album, and it’s an instant hit.

Kassel may not be the coldest city in Germany, but it only gets 31 summer days a year – for the other 239, you need to bundle up well. Despite this, the music of Clemens Rehbein and Philipp Dausch, who have forged a successful international career under the name of Milky Chance, captures the heady essence of those fleeting 31 summerdays. The rest seem to have passed them by without leaving a mark.

And maybe that’s the duo’s secret. Sure, there’s a certain hint of melancholy in their songs, just like in any good pop music, but the main feature that Milky Chance has cultivated in their sound is a cool nonchalance, a silky ease redolent of California. This potent mix has catapulted the duo to phenomenal success. And no article about Milky Chance is complete without a few of the band’s impressive numbers: 300 million clicks for the megahit “Stolen Dance,” which earned one gold record after another across the world before ultimately going quadruple platinum.

Even though figures like this are sensational, the band is still achieving new records. Milky Chance’s sophomore album “Blossom” dropped on March 17 and charted in more than ten countries – including the U.S. – in record time. The album even reached the top ten in Germany, Switzerland, Austria, Canada and Australia. The first single “Cocoon” was a global hit, earning it top spots on the iTunes charts of 15 countries. The song rocketed to the top five in Germany, Canada and Australia, while it hit number seven in the U.S.

Anyone who predicted that the hype generated by the surprise success of the duo’s debut album “Sadnecessary” would fizzle out fast has certainly seen the light now as the saga continues. The release of the second single from the new album will only boost the duo’s success even further.

“Blossom” starts off like an upbeat DJ set that carries listeners away, and then one of those calm, captivating melodies suddenly shows up with that mix of the casual and the irresistible that only Milky Chance can create. Shimmering guitars and a calmly driving beat are, once again, followed up by an international vibe, a spacious feel and intimacy all packed into one. This laid-back, feel-good swinging sound paired with the gravelly, streetwise voice of Clemens Rehbein permeates the song with every note. Not even the sky is the limit for this music. At the same time, it is totally authentic; it doesn’t try to be anything more than it is.

“So what’s the point, of going somewhere / And everyone you see, you see is just nothing but confused,” Rehbein sings. The duo themselves can get a little confused sometimes, too, like when they appeared on the talk show of legendary U.S. host Conan O’Brien recently and had to answer all sorts of questions.

The duo don’t have much time for sitting back and pondering it all, though – while all of this is going on, the guys are on the road. This fall, they will be performing in Hamburg, Frankfurt, Cologne, Berlin, Munich and Leipzig. It will be one of the last opportunities to see the band in more intimate settings – the venues are already getting bigger and bigger.

By that point, people from California to Dinslaken will be whistling, singing and sharing “Blossom” non-stop. So it’s high time we finally stop referring to Milky Chance as a phenomenon and recognize the duo for what it is: one of the most talented, thrilling and successful bands of our day – in Kassel and everywhere else.