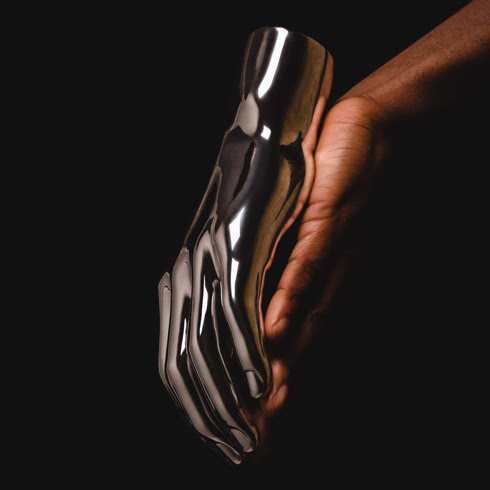 There are people who thought Actress otherwise known as Darren Cunningham had retired. They were a bit premature. He’s ready instead to return with a new album and alter ego, both of them “AZD” to be released on Ninja Tune. And to prepare you for what lies ahead here’s the album’s lead track, ‘X22RME’ (pronounced “Extreme”) which elegantly plays between the lines of Oriental classic rave and Balinese warehouse Techno machined in a Rotherhithe lock up welding the grooves into a seamless cracked joint.

“I did fifty versions of the same tune” Cunningham recalls. “Different parts were on tape, CD, different old computers and USB sticks, so it was quite intimidating to revisit and complete. The track was in the end built out of 3 hours of different passages.” The finished work is harsh and beautiful all at once, its incredible complexity never overwhelming its drive.

“AZD” (pronounced “Azid”) is a chrome aspect journey into a parallel world. An artist who has always preferred to make music than to talk about it, in “AZD” he has achieved another remarkable landmark, one which is as resistant to interpretation as it is demanding of it. ‘X22RME’ is a key note example of the influence the Black artists James Hampton and Rammellzee had on the creation of the album – a man who created art through “Sourcing castaway materials from their environment and reinterpreting them into absolute majesty given from the fourth dimension.”

As if the record itself isn’t enough, Cunningham is currently preparing a new live show, to be debuted at Convergence Village Underground on March 24th. Presented as AZD, Cunningham says it “will be a test frame for linking circuits using various forms of language — Midi globalised language, Lyrical language, Tikal Graffiti code and various other Synthesiser language — to create one intelligent musical instrument called AZD, if successful it will produce the first translucent, non-soluble communication sound pill synergised through impressionistic interpretations of technological equipment. This is the music vitamin of the Metropolis.”

The simplest you could say about “AZD” is that it’s art – the unique creation of a unique mind. There will be few more distinctive, brilliant or visionary suites of music released in 2017. Call him what you will, this is the year that Darren ‘Daz’ Cunningham – aka Actress, aka AZD – asserts more clearly than ever before his complete independence.