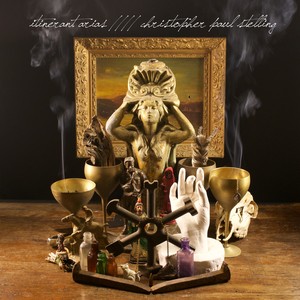 Acclaimed troubadour Christopher Paul Stelling has released a new track today entitled “Cost of Doing Business” from his forthcoming album Itinerant Arias, out on May 5th. With a steady drum beat, “The Cost of Doing Business” finds Stelling’s melodic guitar picking augmented by splashes of strings and some backing vocals to create something that feels both observational and intensely personal. Listen here:

“This song in particular has given me a lot to think about,” Stelling says. “I’ve rarely if ever thought of songs as statements, but more like questions posed to and from my own subconscious. Sorry if that sounds a little pretentious, but it’s just the way it is. The song muses on the idea that there’s not simply a monetary but also a physical toll when the business that one is involved in is their art, their creative life force, their soul. And of course it has to reference that Faustian myth, that took hold of the human psyche long before Robert Johnson took his guitar to the crossroads. It’s always easy to imagine a future for yourself where everything is better and you’re more provided for, but there is always a price. That’s kind of where this song takes root. Even more universally relevant to all of our current state of affairs: Is it possible that not only individuals but entire nations can fall victim to a silver tongued devil who surrounds himself with golden adornments and promises a better future but inside is rotten to the core, corrupt, and willing to sell everyone down the river simply to further their own cruel and selfish interests?”

Unlike previous records, Itinerant Arias finds Stelling backed by a band, electrified if you will. It is a record inspired by movement and travel. The album cover a photograph taken by Stelling himself depicting an arrangement of found objects on his table. With a little more than a week before returning to the road, he retreated to a friend’s Connecticut cabin out in the woods with some musician friends. They slept there, ate there and didn’t leave for the next eight days, recording the haunting and powerful record.

Stelling is getting ready to hit the road again, doing what he has for years now, playing music, and moving, documenting the all struggles and victories of the world he passes through. The tour kicks off May 6 in Brussels. See the full routing below.