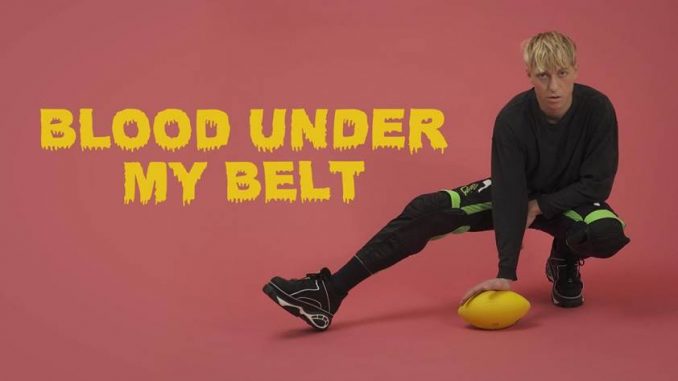 Early praise for “Abysmal Thoughts”:
“This is the Drums you know, and indeed, you’ll feel compelled to answer back that you love them too.” – Pitchfork
“‘Blood Under My Belt’ swings back to the band’s halcyon-sounding days, recalling the likes of the Beach Fossils and Wild Nothing via its rippling bounce and rotational hooks.” – Stereogum
“Indie pop gems” – SPIN
“First single ‘Blood Under My Belt’ is quintessential Drums, instantly catchy and a nice welcome back.” – Brooklyn Vegan
“The song serves as proof that Pierce can still write an incredibly danceable pop song, even if the subject matter is far from upbeat.” – Paste

The Drums recently announced their return with “Abysmal Thoughts,” their fourth album which will be released on June 16th via Anti-. Today the band shares the music video for the record’s first single “Blood Under My Belt,” a quintessential Drums song: a real heartbreaker disguised as a sunny track, showcasing front man Jonny Pierce’s masterful pop sensibility. Watch the music video on YouTube.

Jonny Pierce on the making of the music video:

“I hate making music videos. But, alas, sometimes you need to feed the beast, and I decided to make a music video that explores some visual fetishes of mine – mainly sportswear and a new exploration of colors that I’ve long-loved but hadn’t been a part of the band’s aesthetic until now. I love this new era of The Drums because I’m allowed to express exactly what I want and take it all the way.”

Across a year and three months of home recording between Los Angeles and his cabin in upstate New York—with the same guitar, synthesizer, drum machine and reverb unit he’s played since the beginning of The Drums—Pierce put together “Abysmal Thoughts.” With help from engineer Jonathan Schenke (Parquet Courts, Mannequin Pussy and more), the result is an unflinching autobiography with Pierce back in full control of the band. He’s back to not just writing all the songs by himself but playing every instrument, too, this time realizing exactly his own personal vision for the band. Not coincidentally, it’s some of the most revelatory work he’s ever done. It is a vivid self-portrait, alive with the hyperdramatic emotional potency of the Smiths, the arch literary pop moves of New Zealanders like the Verlaines and the Clean, and the riotous clatter-punk power of the UK DIY bands of 1979.