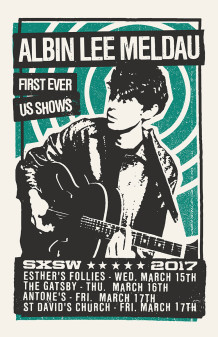 2017 is shaping up to be a breakthrough year for Albin Lee Meldau, a modern day troubadour who hails from Gothenburg, Sweden, the son of a Swedish jazz singer mom and a British punk rocker dad. After captivating audiences across Europe with his unique voice and riveting performance style, Albin will be making his U.S. live debut this month with four performances at the SXSW Music Festival. Albin is also set to perform at the 2017 Bonnaroo Music + Arts Festival this summer. Hear Albin talk about his music and message here.

Last year Albin signed with Astralwerks who re-released his stunning debut EP Lovers. Albin has already notched more than 18 million streams on Spotify, with the track “Lou Lou” reaching #1 on Spotify’s Viral 50 chart in five countries. Albin is currently working on new music to be released later this spring.

Albin was nominated for Best Newcomer at the 2017 Grammis (Swedish Grammy Awards) and won the 2016 Anchor Award, an international competition hosted by the Reeperbahn Festival in Germany that seeks out the best new emerging talent. Albin was selected by a jury that included producer Tony Visconti (David Bowie) who sang Albin’s praises in presenting him the award:

“Something is pouring out of his heart and soul when he sings.”
“his brand of brooding, melancholic pop, which is emphasized by his deep, soulful vocals, is impossible to ignore.”
—Huffington Post