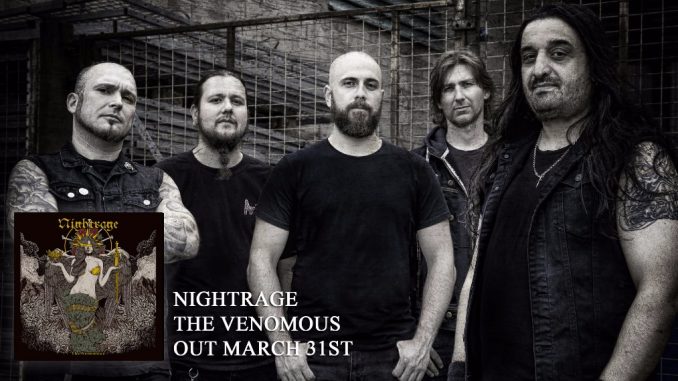 “We are the only cure to the poison we spit!”

The concept and misanthropic message of NIGHTRAGE’s seventh album might appear simple and straight forward. However, “THE VENOMOUS” is everything BUT simple!

This relentless tale of extinction is told with as much venomous aggression as there is intriguing and mesmerising melodies. Memorable hooks and some of the catchiest choruses that metal has seen in decades, does nothing to compromise the brutality and honesty that NIGHTRAGE is known for.

NIGHTRAGE has always been honest and true to their craft and with “THE VENOMOUS” they have made their best album to date. With the addition of Magnus Söderman on guitars and Lawrence Dinamarca on drums, Marios Iliopoulos, Ronnie Nyman and Anders Hammer have reinforced their foundation to create a masterpiece of pure melodic death metal that is “THE VENOMOUS”

“THE VENOMOUS” is catchy and extreme, melodic and wild! And lyrically it deals with the failure of mankind and how we as human beings are racing towards our own extinction.

Make no mistake, life is hard, but Nightrage is harder!