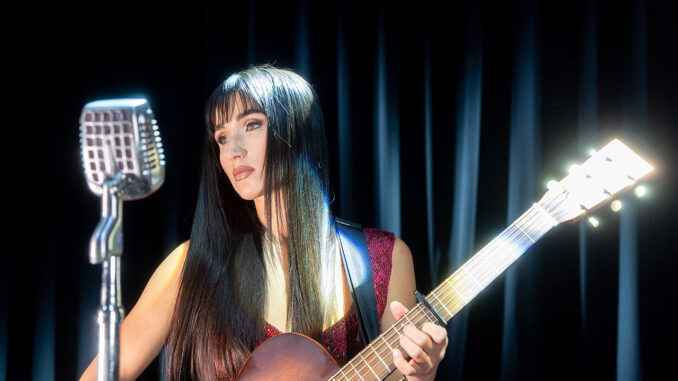 “mistress of minor-key introspection, her songs carrying the kind of emotional weight more often associated with a battle-scuffed veteran” – Uncut

California singer-songwriter Jade Jackson has shared “6FT Changes” today, a new song detailing the adjustments that have been made to daily life due to the COVID-19 pandemic. “Six feet changes the way it was / Handshakes and hugs in a crowded space / Dancing with strangers and holding up beers / Tapping on shoulders and whispering in ears / Was taken for granted all these years,” Jackson croons in the song’s timely lyrics.

Directed by Sean Stout, Jackson recently filmed a performance of the song at the empty Fremont Theater in San Luis Obispo, her hometown.

One night in 2020 Jackson had a dream about playing a show, sweaty and crowded, where no one needed to sanitize their hands. She posted about the dream on social media and got a great response from fans who were looking forward to returning to shows as well.

“Reading through the comments I felt the oh-so familiar nudge that a song was on its way,” Jackson explained. “Later that evening staring up at the ceiling, the song – starting as a faint echo of my subconscious mind – grew louder until I quietly slipped out of bed and found myself in the dark of my living room holding my guitar. As soon as it was written I knew I wanted to share it with those who’d helped inspire it. Theaters sitting somewhere in the dark, tour vans parked, and people like me who see live music to escape, connect and be, I wrote this for you.”

Jackson hails from Santa Margarita in central California, just a few miles from where Buck Owens and Merle Haggard popularized the Bakersfield, California country sound. Growing up Jade spent endless nights working at her parents’ restaurant, learning guitar and writing songs by the age of 13. By the time she graduated high school, she had written over 300 songs. Jackson released her sophomore album, Wilderness, in June of 2019. “She allows some cracks around the edges of her voice that reveal vulnerability in a way reminiscent of Lucinda Williams,” said the Los Angeles Times. “There’s often a sense of wide-open spaces and possibilities, literally and psychologically, in her songs.”

Wilderness is a powerhouse of a record about the in-betweens and stepping stones we dwell in and leap across while coming to terms with our senses of self, and how melancholy can be a powerful weapon to wield—especially in the form of a roots-rock or country song. While some tunes are less hopeful than others and some contain brighter glimmers of light, Jackson has chosen to heal herself through this raw, pure approach, finding comfort in her own skin and spending less time in the observational spaces of her past work.

“Wilderness as the title of my album is this in-between area I’m in right now as a musician,” Jackson explained. “I know where I want to go—I can visualize it—but right now I’m walking through the wild, still picking up tools, still learning, and making my way.”