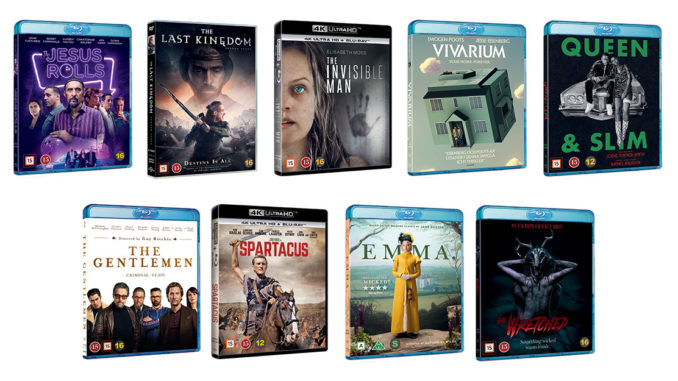 THE JESUS ROLLS
A spin-off of The Big Lebowski (1998) centered on the notable bowler, Jesus Quintana.
On Blu-ray & DVD & July 6

THE LAST KINGDOM SEASON 3
As Alfred the Great defends his kingdom from Norse invaders, Uhtred – born a Saxon but raised by Vikings – seeks to claim his ancestral birthright.
On DVD July 6

THE GENTLEMEN
An American expat tries to sell off his highly profitable marijuana empire in London, triggering plots, schemes, bribery and blackmail in an attempt to steal his domain out from under him.
On Blu-ray & DVD July 13

VIVARIUM
A young couple looking for the perfect home find themselves trapped in a mysterious labyrinth-like neighborhood of identical houses.
On Blu-ray & DVD July 13 (Sweden only)

THE INVISIBLE MAN
When Cecilia’s abusive ex takes his own life and leaves her his fortune, she suspects his death was a hoax. As a series of coincidences turn lethal, Cecilia works to prove that she is being hunted by someone nobody can see.
On Blu-ray, DVD & 4K Ultra HD July 20

EMMA
In 1800s England, a well-meaning but selfish young woman meddles in the love lives of her friends.
On Blu-ray & DVD July 27

QUEEN & SLIM
A couple’s first date takes an unexpected turn when a police officer pulls them over.
On Blu-ray & DVD July 27

THE WRETCHED
A defiant teenage boy, struggling with his parents’ imminent divorce, faces off with a thousand year-old witch, who is living beneath the skin of and posing as the woman next door.
On Blu-ray & DVD July 27