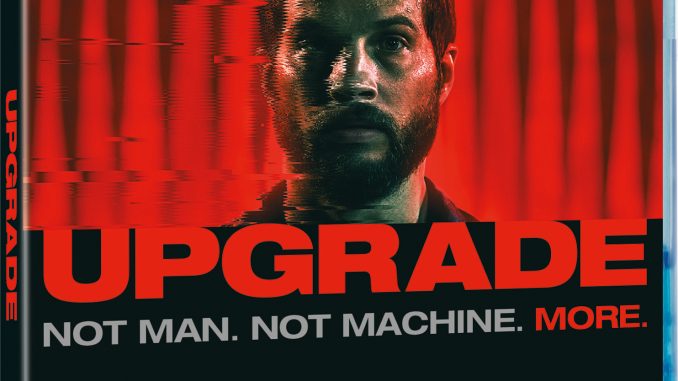 THE PRODUCER BEHIND GET OUT AND THE CO-CREATOR OF SAW TEAM UP FOR THE ULTIMATE MAN VS. MACHINE ACTION THRILLER

Blumhouse creates an all-new intense horror-action film with UPGRADE, arriving on Blu-ray™ & DVD on January 14th, from Universal Pictures Home Entertainment. After a shocking tragedy leaves a man paralyzed and dispirited an innovative technological opportunity emerges, offering him the ability to restore his mobility and seek revenge. Starring Logan Marshall-Green (Spider-Man: Homecoming, Prometheus), Betty Gabriel (Get Out, The Purge: Election Year) and Harrison Gilbertson (Fallen, Need for Speed), UPGRADE, takes viewers on a wildly thrilling ride through the intriguing world of artificial intelligence.

After his wife is killed during a brutal mugging that also leaves him paralyzed, Grey Trace (Marshall-Green) is approached by a billionaire inventor with an experimental cure that will “upgrade” his body. The cure–an Artificial Intelligence implant called STEM–gives Grey physical abilities beyond anything experienced, and the ability to relentlessly claim vengeance against those who murdered his wife and left him for dead.

Produced by Jason Blum (Get Out, Split) and written, directed, and executive produced by mastermind Leigh Whannell (Saw, Insidious franchise) UPGRADEis energetic and powerful, questioning the nature of human versus computer and keeping audiences captivated from start to finish as Grey’s life is turned upside down in a technology-controlled world.