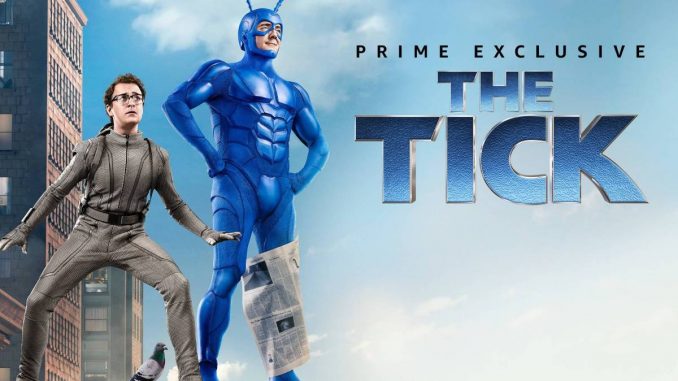 In case you haven’t heard lately, the Tick is back on TV in the form of Amazon Prime’s live-action Tick series. We saw a pilot episode drop almost a year ago with a promise of more to come. Five more episodes dropped on August 25, 2017 and the feedback has been great!

I am a long time fan of the Tick. My mother and I used to watch the cartoon on Saturday mornings and laugh at its ridiculous nature. I tried to watch the first live action attempt at the Tick, but it was almost unwatchable for die hard fans. The first live action attempt lost a lot of the tongue in cheek humor that made the cartoon such a success. Plus, wrangling over the rights to some of the characters left us without key elements like Die Fledermaus and instead gave us the rather disappointing Batmanuel.

Amazon’s version of the Tick seems to get the true humor behind the character. We see a strong but dense superhero archetype in Peter Serafinowicz’s version. He is trying to convince a rather backward but oddly brave Arthur (played by Griffin Newman) that destiny is calling them both to work together to clean up crime. Jackie Earle Haley continues making the rent by bringing us another comic character in his portrayal of the Terror. If you haven’t taken the time to hop on an Amazon Prime account and check out the Tick, you should. Take it from an old school dispenser of the savory morsels of sweet justice, you should take the night off, lock yourself inside and let loose your best battlecry. SPOON!!!!