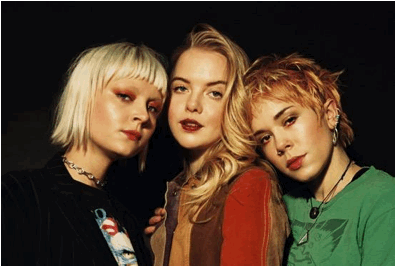 “Dream Wife is a perfect example of what makes SXSW special, the discovery and excitement of seeing something real that has feeling and meat to it, and makes you grateful you were there to witness it.” – NPR Music
“a well-oiled machine worthy of the Strokes but performed with the righteous indignation of Bikini Kill…snappy, punk-informed rock ‘n’ roll.” – Stereogum
“Dream Wife offer a soundtrack ripe for a punk Sofia Coppola movie soundtrack” – NYLON
“the tunes are something to behold” – Entertainment Weekly
“The girl gang proving there’s force in femininity. Dream Wife create pop anthems for the Instagram generation” – Dazed
“Icelandic-Brightonian three-piece with the attitude of New York punks and pizazz of disco queens” – The Guardian

Earlier this year, London-based and British/Icelandic born trio Dream Wife made their triumphant U.S. debut on tour with The Kills and at SXSW, which earned them praise from the likes of NPR, Entertainment Weekly, DIY and more. Today, the band announces a new EP entitled Fire to be released on September 29th via Lucky Number. The EP’s title track can be heard now via The FADER. EP cover art and tracklisting are below.

“It’s a song of explosive emotion; volcanic, eruptive and reflective in turn,” explains the band members, all three of which are astrological fire signs, to The FADER. “During moments of pure connection a bolt of fire can be felt between people. The explosion begins; movement is electric, conversation erratic and you become fully immersed in the moment. Thematically and tonally we explore the paradox present in the symbolism of ‘fire’ as both a creative and destructive force.”

Listen to “Fire” via The FADER HERE.

Dream Wife released their debut EP last year which earnedthem spins on BBC Radio 1, BBC 6 Music, Beats 1, and KEXP, as well as massive support from The FADER, Dazed, The Guardian, i-D, NME, and more. The band has also garnered a well-deserved reputation for their exhilarating live shows, having sold out venues acrossUK/Europe, played festivals such as Iceland Airwaves, and toured with the likes of Sleigh Bells. This Summer festival season, they performed at Blue Dot, Benicassim, Latitude and Truck, and will embark on a headline UK tour in October. See below to find a UK/Europe shownear you.