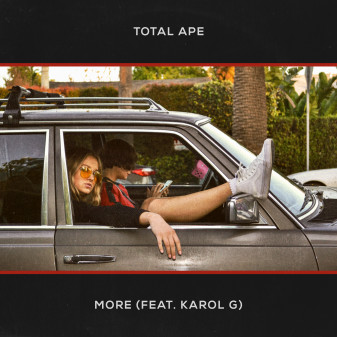 Swedish production duo Total Ape turned heads back in April with their summer-ready anthem ‘More’. The original track, featuring vocal support from Miss Li, was met with commercial and critical success alike, amassing over 4.5 million plays on streaming platforms in just a couple months. Billboard lauded the song’s catchiness, stating “It’s got a hook that digs deep into your brain and nestles in for good”. Now, ‘More’ returns to fans on a more global scale, with a latin version performed by Colombian sensation Karol G.

Karol G is a superstar in her own right in Latin America. Having made it to the finals of Latin America’s X Factor is 2010 ( El Factor X), Karol G has since accumulated millions of social media followers and YouTube views. The video for her song ‘Amor De Dos’ featuring Nicky Jam, alone has garnered over 81 millions views.

“More is all about excess. The old indian and pagan tribes used to gather all their riches and burn them, just to show off their swag. Today, we as a civilization are still about that life. From something relatively small like people just going hard on the weekend, to the truly extravagant, like Nicholas Cage buying dinosaur skulls for millions, or Mike Tyson in general. The song is really about the nature of human beings.” – Total Ape

Another music video for ‘More’ is slated to be released later this summer, while the first music video (for the Miss Li version of ‘More’) interpolated the Sofia Coppola-directed 2013 film The Bling Ring, which re-tells the story of a string of robberies that happened in LA when a group of teenagers robbed a number of A-list celebrities’ houses in the Hollywood Hills.

Watch the video for the original version of ‘More’.

ENRIQUE IGLESIAS utses till Top Latin Artist of All Time