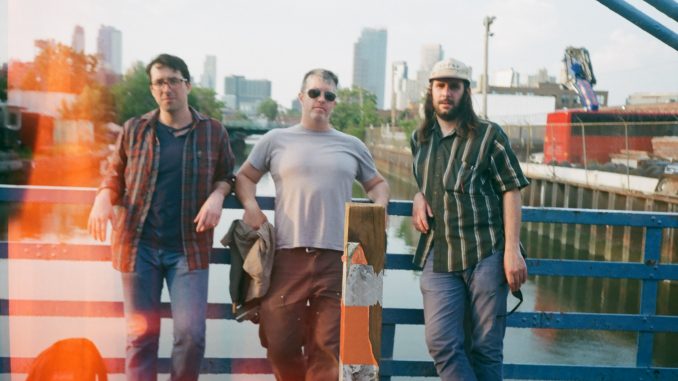 “Somewhere back in the early 2000s, I encountered Mouthus, duo of Brian Sullivan and Nate Nelson, in a tiny drop-ceiling storefront venue somewhere in California’s Central Valley. The burly Sullivan and less ectomorphic Nelson lugged a drum kit and a full-size Marshall stack into the tiny, 300-square-foot room, slammed a half dozen Red Bulls, and, after pacing wild-eyed for a few minutes, blasted off into a torn-up, arena-volume sonic catastrophe that drove basically everyone immediately out onto the sidewalk. From what I could tell, it was a typical night. As releases piled up, Mouthus ripped apart the rulebook of assumed “noise rock,” building disintegrating towers of sound just as easily as murmured acoustic mantras. As the twenty-naughts melted into the twenty-teens, Mouthus collapsed into oblivion.
Soon after, Sullivan re-emerged with a series of head-scratching, melodic and murky sets as Eskimo King that traced the gentler facets of Mouthus into pop oblivion. This quickly evolved into United Waters, a shattering and re-stitching of Beach Boys and Fleetwood Mac-oid song craft that was as cracked and strangely woven as Mouthus’ previous deconstruction of excess wattage. In 2011, Arbitrary Signs released United Waters’ debut, Your First Ever River, showcasing Sullivan’s murmuring vocals in settings that strangely echo New Zealand perennial Peter Jefferies as much as they do sunny West Coast coke rock.

“On its new album The Narrows, United Waters removes the aural fog covering its earlier releases with a luminescent view of its song craft. This new transparency has an airy clarity that highlights the outfit’s woozy guitars in microscopic detail. Rock is present, but the album’s rhythm section lingers behind in a deep distance creating the group’s most stark and intimate release to date.

With proof from bare-bones ballads like “Least Turn” and “Move the Distance”, categorizing United Waters with other demented pop margin walkers such as ‘90s Siltbreeze Records, Hall of Fame, and The Tall Dwarfs is all too easy. However, United Waters resemble anything but a “pop sensibility” as their raw materials are too willfully damaged, busted up and taped together to transmit such a style. Still, reasonable facsimiles of said influence do exist. The track “Even the Moon” is reminiscent of nothing less than a Nikki Sudden demo cassette grinding through a cheap tape deck while “Mile Wide” recasts chorus-pedal proto-goth as a 4AD 12” with the grooves pressed off-center.

The album’s title track ultimately has the last word with its swirling, off-key leads uncoiling in a shambling crescendo that re-conjures Sullivan’s earlier demolition works. Though never quite attaining a full-on climax, the song’s exquisite restraint caps the album with a locked-down coda that lingers far longer than its noise-rock antecedents, opting instead to offer its heavy hurricane winds in slow motion.” (Tom Carter, 2017)