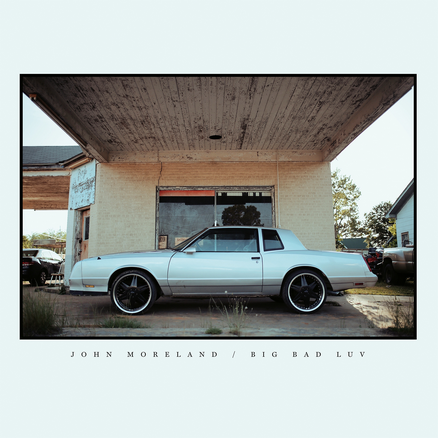 Ahead of his first album with 4AD, Oklahoma troubadour John Moreland has shared a new song, Big Bad Luv Americana opener ‘Sallisaw Blue’, which was premiered today by the FADER.

Moreland’s upcoming album, Big Bad Luv, is an honest, bruising experience. A record about love, faith and the human condition, it’s his debut for 4AD and the first full-length released to worldwide anticipation on May 5th 2017.

Moving from Kentucky to Tulsa when he was ten years old, John fronted hardcore and punk bands throughout high school years before feeling the pull of the lyricism he heard in folk and country music. A prolific songwriter, he has released largely self-produced albums every other year since 2011. His fourth album, Big Bad Luv was recorded in Little Rock, AK, with a band of Tulsa friends, later mixed by GRAMMY winning Tchad Blake, who has worked with Al Green and Tom Waits.

Sallisaw Blue
Arkansas River, Sallisaw blue
This town never seen nothin’ like you
They got silver spoons for American gods
I wanna be stoned, thrown American rods
I don’t know anything, you don’t know shit
With your bloodshot eyes giving my black heart fits
There’s a neon sign that says ‘big bad love’
And a noose hanging down from the heavens above

It’s no use, God bless these blues
Let’s get wrecked and bruised and battered
I need you, come on, burn right through
Honey, show me I’m not shattered
Down for the count, along for the ride
Sipping cold medicine, ruining our lives
Slumming I-40 with American songs
They can bury our bodies in American wrongs

John Moreland will be playing full-band shows in the UK during the release week of Big Bad Luv. Starting on May 6, he visits Glasgow, Leeds and headlines two nights at London’s Union Chapel. See below for a full list of tour dates.