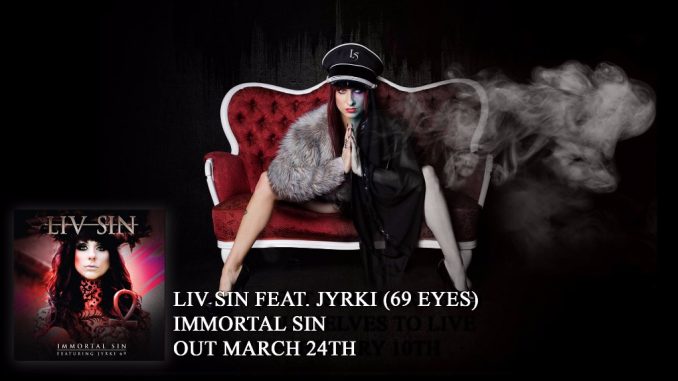 Despite great success, the band Sister Sin parted ways in late 2015 after a 13 year career. Now the former singer and major force from the former band, Liv Sin, rises from the ashes with a new band and a whole new album.

“The bitch is back! Nevermind any political correctness, listen to her voice and you know what I’m talking about. This is metal and I’m glad to be a part of it!”
//Jyrki 69 (The 69 Eyes)

The third single from Liv Sin, “Immortal Sin”, will be released March 24th. This time Liv has joined forces with the singer Jyrki 69 from The 69 Eyes.

” I’ve known Jyrki for a long time and I’ve always wanted to do a duet with him, his voice has such a cool and dark tone. But there was never any time or any song the suited. As soon as we decided to do “Immortal Sin” I heard his voice in my head singing, and I immediately asked him if he wanted to join me. He liked the idea as much as I did and I’m so honoured and happy we did this. I just love the feeling in the song and his voice is totally perfect for it. I wouldn’t been the same with only my voice.” // Liv Sin

Liv Sin’s upcoming album “Follow Me” will be released via Despotz Records April 28th 2017 and is co-produced by longtime ACCEPT and U.D.O. member Stefan Kaufmann and U.D.O. bassist Fitty Wienhold.

About Liv Sin:
From the gutters of southern Sweden, Liv Jagrell emerged as a major force as the vocalist for hard rock band SISTER SIN. Throughout their 13-year career, SISTER SIN sold thousands of records and toured the world with high-profile tours supporting the likes of SLAYER and KING DIAMOND on the Rockstar Energy Drink Mayhem Festival, as well as being a part of the Revolver magazine “Hottest Chicks In Metal” tour. SISTER SIN toured relentlessly for over a decade across Europe and North America garnering an intensely loyal following of rockers that craved the band’s aggressive and melodic brand of hard rock.

When SISTER SIN called it quits at the end of 2015, Liv knew that she had much more to offer the world and her fans. From this, LIV SIN was born. The new music shows the power and attitude that Liv is known for. She says: “For me, it has never been an option to stop singing. I live for the stage and for my fans. I still miss SISTER SIN, but I am very excited to work on my own project, and I can promise it will not be some soft pop rock. This is going to be metal deluxe, because that’s who I am!”