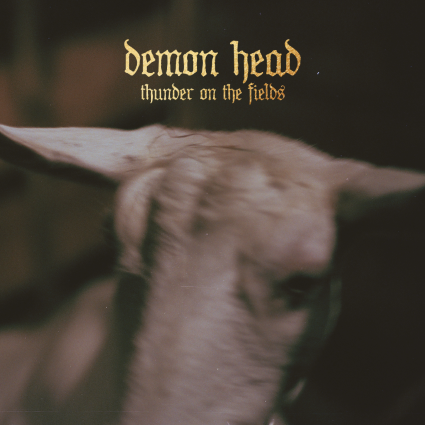 On the 7th of April 2017, Demon Head’s new album THUNDER ON THE FIELDS will be released through The Sign Records. The songs were recorded by the Copenhagen band onto 16-track tape, in an isolated cabin where they locked themselves in for weeks in the winter of 2016.

Like its well-received predecessor Ride The Wilderness, the fruit of their communal work is powerfully crafted from start to finish. While the sound stays true to the sinister atmosphere of the debut album, the music has evolved to the next logical step: darker, more tight-knitted, and more diverse. Demon Head is not about trends or imitation. It is about the burning love for music. While in part an homage to the first heavy music, the songs have their own voice. The attitude is of originality and urgency rather than pretense.

Since the beginning, the band has relentlessly travelled on the road and off the beaten path, playing loud, wild concerts with bands from many genres and scenes. In the same way, the influences on THUNDER ON THE FIELDS are hard to pinpoint; many have experienced that nothing sounds quite like the doom-tinged heavy rock of Demon Head, while it retains a strange familiarity of haunting melodies that don’t seem to want to escape the listeners cranium. Comparison is always difficult and limiting, but you might get an idea of the direction if you imagine if the tour bus of Judas Priest had crashed into a whiskey bar where The Doors and Neil Young throw dice with the devil, while The Stooges cover Big Mama Thornton on the decrepit corner stage.

Vinyl, CD, and digital versions will be available worldwide, courtesy of The Sign Records. Cassette tapes will be released through Caligari Records.