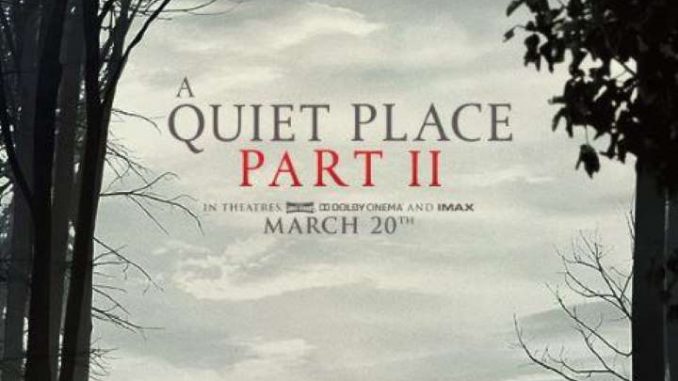 FIVE THINGS YOU NEED TO KNOW

A FAMILY REUNITED
Following the huge success of the first film, A QUIET PLACE PART II reunites the filmmaking partnership that spawned it, Krasinski again writing and directing his real-life wife Emily Blunt. Despite the first film ending on a cliffhanger, a sequel was never planned but the idea of how people were surviving and how the world could go on were questions that Krasinski could not shake. “I never wanted to go outside the farm on the first one, but it was always in the back of my head. And then to see the reaction from the first movie, and that people had that same question, was really inspiring to me. Because it was something that I felt very much I wanted to explore” says Krasiniski. This led to the spark of an idea that took him on a journey to create the expanded world in A QUIET PLACE PART II.

DAY 1
In the first film, audiences met the Abbott family on ‘Day 89’ after the alien invasion, which they never saw play out on screen. In A QUIET PLACE PART II, opens with a massive-scale flashback to the terrifying bloodbath of ‘Day 1’, and audiences will finally have their question answered. While A QUIET PLACE left people on the edge of their seats asking many questions, PART II provides context and gives a glimpse into the world before silence and the journey after the horrifying end in the first movie.

DAY 474
A QUIET PLACE came loaded with iconic imagery, unrelenting suspense and a shotgun-clicking cliff hanger that left audiences gasping for more. “The first movie was absolutely a metaphor for parenthood,” Krasinski says. Where A QUIET PLACE was really about the lengths a parent would go to for their child, PART II is about the children themselves. “I love that idea,” Krasinski says, “that this little girl has the answer, and she can’t live with herself knowing that she’s only protecting this small group of people [her family], when she could be protecting the entire world.” Much of the focus of A QUIET PLACE PART II centres on the family coping with grief and pain while still searching for a way to survive.

BEYOND THE PATH
Where the first film was set almost entirely in one location, A QUIET PLACE PART II uncovers a new path. The family’s search for other survivors takes them on a perilous journey. With a new-born baby in a box with a dwindling oxygen supply, the family forges across new, threatening locations. “If the first [movie] was intimate, almost like a homegrown western, this is more of a travelling western,” says Krasinski, who cites the unforgiving landscapes of No Country For Old Men, True Grit and There Will Be Blood as inspiration. “It feels more epic.”

THE THREAT HAS EVOLVED
It was never the horror that drew Krasinski into the world of A QUIET PLACE; rather, it was the feelings that the concept stirred deep within him. A QUIET PLACE PART II is no different with the introduction of mysterious new characters played by Cillian Murphy and Djimon Hounsou, who may offer a safe haven or pose a threat. “What [Murphy and Hounsou’s characters] represent the most strongly is that there are other people out there,” says Krasinski. “‘How did they survive and how do they survive?’ becomes the question and the story for the second one.”