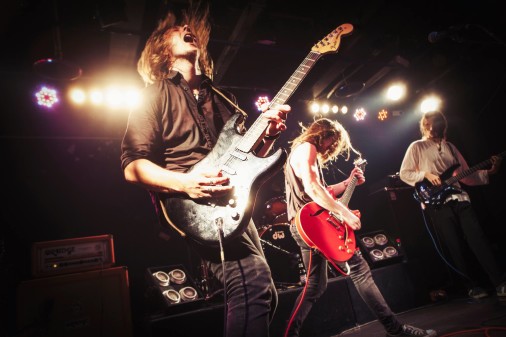 ”GREYBEARDS play an unashamedly radio-friendly style of music, but they play it with a level of enthusiasm and joy that makes it clear that band is more than just another rock act, it’s a labour of love.” – Powerplay Mgzn

GREYBEARDS is melodic rock with a twist of punkrock. The debut album was released back home in Sweden in 2015 and in the rest of Europe in early 2016, and the second album is in the making with the famous Swedish producer, Chips Kiesbye (The Hellacopters, Crucified Barbara, Bonafide, etc.) Greybeards debut album have got many impressive rates and reviews in Europe. The second album will be released in late november or december 2017 and a tour will soon be announced for Europe early 2018.

ROLLING STONE MGZN: Review 3/5 “Greybeards from Sweden – just 21 throws at pathos an all mainstream rock clubs claim “We’ll Never Die”. When, if not now?
Rock Hard: “Obviously most of the tracks are played live, and the music sounds wild and rampant as a result. The distorted riffs merge with the driving drums, thumping basses and the extremely lively singing to a unit, in a way that have not been heard in a long time. The monstrous enthusiasm of Greybeards shows how rock music may sound in 2016…”

Metal Hammer: ”The debut album is certainly rocking very entertaining. Musically all four Greybeards have learned their craft, there is no question. LONGING TO FLY is a strong and entertaining rock album that was made for the road. “ (5/7)

Sweden Rock Mgzn: “There is something incredibly honest and true with this album and the singer/rythm guitarist, Olle Westlund has a special voice that feels on your bare skin.”

Templores: ”Greybeards is a Swedish rock band that was founded in 2012. Heavily influenced by Foo Fighters and Hellacopters, their music lies somewhere in between. Rock’n’Roll is not dead. It just moved to Sweden. At least this is what this album sounds like. Tens songs with a total duration of forty-two minutes get you moving along and dance. Spreading a good vibe, Greybeards put out a brilliant debut album. Catchy melodies and great lyrics cause the songs to get stuck in your head … and it gives you the impression of reaching the impossible. ”