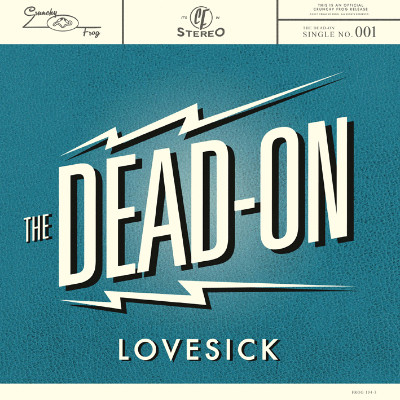 “Lovesick” is the debut single from a new shooting star in the rock’n’roll sky. It’s the first sneak peek of an EP that will be out late 2017. The song shows a band with equal amounts edgy garage rock sound and melodic talent. With their feet firmly planted in both garageand classic rock, “Lovesick” is a high octane infectious tune with lots of swagger that’ll give you a serious sonic boost. Bands such as Jet, Black Keys and Arctic Monkeys are relevant references, but the “normal” rock constellation has been given a bit of a twist. The bass is played by a deeply grumpy Moog synth giving The Dead-On some heavy balls that other rock bands are only dreaming (wet) of. Combined with energetic drums and aggressive riffs on two electric guitars we have a recipe that is… well… dead on.

The video for ”Lovesick” was made by our good friend Peder Pedersen. He has delivered great videos for other Crunchy bands such as ONBC, Tue Track vz PowerSolo and Superheroes, but is (still) mostly known for his videos for Aqua (Barbie Girl), Psyched Up Janis and The Raveonettes from the 90’s and 00’s. When Peder heard the track he immediately envisioned a band of cool kids playing the hell out of the song. And that he got. Just check out the video and rest assured that the future of rock’n’roll is in safe hands.