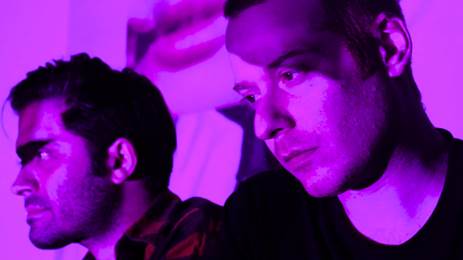 Formed in 2012, Color Film features Richard Penzone and Daryl Palumbo (also the frontman for Glassjaw and Head Automatica). After getting together for a series of live dates six years ago, the two musicians discovered a powerful creative chemistry and ended up writing four albums’ worth of songs within a month.

“We were just trying to write as much material as possible, because it was clear that we were capturing something that doesn’t come along more than once in a lifetime,” says Penzone.

The first product of that creative explosion, Living Arrangements finds Color Film drawing from their mutual love of sonically innovative records within the worlds of post-punk, art rock, and new wave. Artistically ambitious but driven by a certain pop sensibility, the album marks a major departure for both musicians.

“We were both representing when artists we loved were coming into their own a little bit and exploring ideas in a sophisticated, sexy way,” says Palumbo of the inspiration behind Living Arrangements.

Pre-orders for Living Arrangements are available now at http://www.colorfilmmusic.com/.