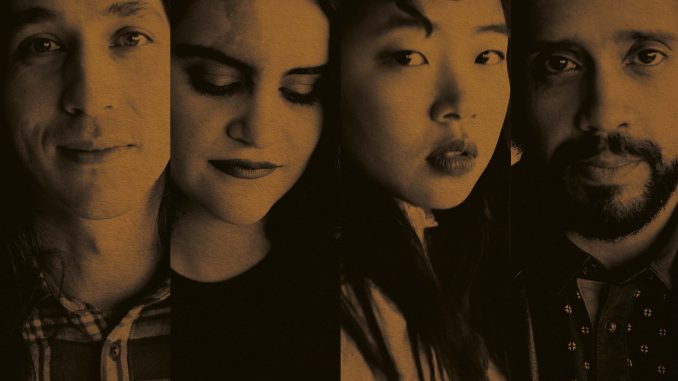 A new Belle and Sebastian release is always something to cheer. So today’s announcement of three new releases leads to the inevitable conclusion: three cheers! Here is the latest installment in a career that has always pursued a singular and delightful vision of what pop represents and what it can achieve, a career that has seen them triumph against the odds to win a Brit award, be one of the first bands to curate their own festival, and play at the official London residence of the US ambassador (the last president’s ambassador, not the current one’s).

Their new music has the timeless blend of joy and melancholy that has always characterised them. What has changed is how the group want their music to be released, and over the coming months, Belle and Sebastian will gift the world a double album’s worth of music – richly melodic, deliciously literate, as gentle as a summer stream but as insistent as a river.

Harkening back to their 1997 release of three consecutive EPs (Dog On Wheels, Lazy Line Painter Jane, and 3.. 6.. 9 Seconds Of Light), Belle and Sebastian will release three new EPs under the umbrella title How To Solve Our Human Problems, with the first EP coming out on December 8th, the second on January 19th, and the third on February 16th (vinyl and digital only). The EP trilogy will culminate with a compilation CD and a limited vinyl box set containing all three EPs, with the option of a box just for EP3 for those who have already purchased 1 and 2.

To celebrate this announcement, Belle and Sebastian has revealed a new song titled ‘I’ll Be Your Pilot’, which can be found on EP2 and heard HERE. The single encapsulates the essence of the groups gentle attention to melody, and takes as its subject Stuart Murdoch’s young son: “Having your first kid is a huge event, so I wrapped a lot of things I felt about Denny into the song. Being a dad made me feel a little like the pilot in The Little Prince, hence all the references to the Sahara!”

Just as those three early EPs are at the very heart of the Belle and Sebastian canon, so these three new releases deserve to be treated not as a stopgap, but as definitive releases in their own right. How To Solve Our Human Problems is both an era of its own, and part of a long, rich history. How To Solve Our Human Problems is, if you like, Belle and Sebastian Redux.

When Belle and Sebastian felt new music percolating within them, they decided to break from the working methods of the recent years and instead stay at home, record the tracks as and when, often producing themselves, working with friends and collaborators to see what emerged. Working in Glasgow gave them the freedom to work without the constraints that making an album can impose: they could take their time honing and experimenting.

One thing that has defined Belle and Sebastian has been their relationship with fans, and that’s apparent in the new EPs. For the three sleeves, the group issued a call to fans to come to be photographed by Murdoch at a studio in Belsize Park in North London. Fifty were selected, and all those photographed were also recorded answering the question: “How do you solve your human problems?”

These days, Murdoch accepts, the band’s relationship with their fans is “very comfortable.” They’re now seeing a second generation – the children of their original fans, kids who’ve found them as the internet has opened up the whole of pop history. But in the past few years, he has started thinking about his own responsibilities to those fans. “I do feel it’s not just about the music anymore, and it shouldn’t be. You have this platform to spread good vibrations. Life is short! What are we doing here? Are we becoming better people?”

How To Solve Our Human Problems Part 1 – Tracklisting:
1. Sweet Dew Lee
2. We Were Beautiful
3. Fickle Season
4. The Girl Doesn’t Get It
5. Everything Is Now

How To Solve Our Human Problems Part 2 – Tracklisting:
1. Show Me The Sun
2. Same Star
3. I’ll Be Your Pilot
4. Cornflakes
5. A Plague On All Other Boys

How To Solve Our Human Problems Part 3 – Tracklisting:
1. Poor Boy
2. Everything Is Now (Part Two)
3. Too Many Tears
4. There Is An Everlasting Song
5. Best Friend