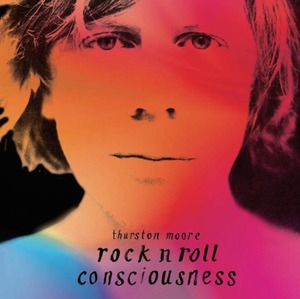 Rock n Roll Consciousness, the new album by Thurston Moore, is set for release on April 28th on Caroline International. The album was recorded with producer Paul Epworth (Adele, The Pop Group) at The Church studios in Crouch End, London and mixed by Randall Dunn (Marissa Nadler, Earth) at Avast! in Seattle, Washington.

The songs Thurston wrote for Rock n Roll Consciousness were brought to life and galvanized by the tight bond of friendship amongst the musicians, a line-up with which he’s been working since 2014: Deb Googe (of My Bloody Valentine, Snowpony) bass, James Sedwards (Nøught, Chrome Hoof) guitar and Steve Shelley (Sonic Youth, Crucifucks) drums. The recording highlights the group’s instrumental strength and beauty following two solid years of touring 2015’s critically acclaimed The Best Day album.

Rock n Roll Consciousness offers a wild leap forward in its expansive, anthemic and exploratory investigations, heralding love between angels, goddess mysticism and belief in healing through rebirth. Inspirited by radical love and the energies of the challenged soul of Mother Earth/Nature in direct resistance, the music is decidedly charged by the force of positive action and a great, true love where the feminine/masculine come together in fluid unions of beauty and light.

“Exalted”, with lyrics by poet Radio Radieux, is an unfolding and emotional journey in homage to sacred energy and exaltation — a drug-infused visit from sacred womyn, sibyls, prophetesses, oracles, and goddesses reclaiming consciousness.

“Cusp” is a springtime charging, propulsive singing, moving march of noise and layered harmonics, with a feeling of Sonic Youth mixed with My Bloody Valentine. Radio Radieux’ lyrics (with background vocals by Deb Googe) evoke the bliss of total love where all dangers subside and creative power engages trans-mind energy.

“Turn On” is a pop-sonic poem to holy love both intimate and cosmic — a patient, yet driving song, which opens space for lead guitar extensions by James Sedwards.

“Smoke of Dreams” focuses on the contemplative mystery of life-defining time travel which sees Thurston recalling a New York City where spirits informed artists seeking poems of beatitude and sonic prayers of joy and wild wonder.

“Aphrodite”, a strange and heavy No wave rocker in salutation to the icon of love, beauty, pleasure, and procreation, enumerates tools beyond the consciousness: electric guitars, the power of mind, imagination, will and intention to practice magick. Thurston sings of spells and possession as he and James pick up energies from string sorcery in a true group séance. Steve Shelley transmits the power of the symbolic into actual shimmering cymbal resonance and Deb Googe’s bass weaves a mesmeric psychic shaping — all in service to the mystic song.

Rock n Roll Consciousness is a new and exhilarating chapter for Thurston Moore and promises to be a creative highpoint for anyone interested in his legacy of avant-garde music and writing. Serious, precocious yet strangely accessible, Rock n Roll Consciousness is as strong a statement as anything he has recorded these last three decades: from Sonic Youth, the band he founded in 1980, to his solo work ranging from 1995’s Psychic Hearts album, to the Beck-produced Demolished Thoughts album of 2011, as well as his myriad collaborations and completely outside-the-margin recordings on a litany of labels (as detailed in author Nick Soulsby’s new investigative book We Sing A New Language – The Oral Discography of Thurston Moore).