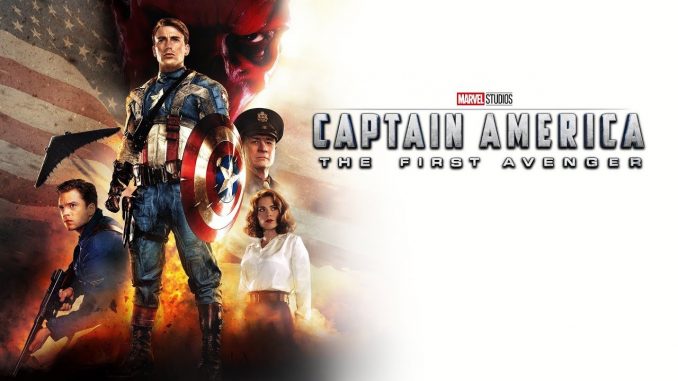 I decided to relive an older movie review since it is the 5th anniversary of it. I wrote this the summer that Captain America: The First Avenger hit the theaters. As I looked it over, I decided that in the current climate of the United States both socially and politically it should be shared. I hope you find it useful and it makes you reflect on the idea that we ARE the good guys and we are NOT perfect, but sometimes you must put aside personal things to stand for the goodness that we are all capable of. Enjoy!

I have been putting off writing this review for awhile now. Captain America: The First Avenger was a rarity for me. I really liked it. I did not see it under normal circumstances and that made me nervous at first. The movie was the culmination of a series of events that has led me to social commentary.
My Captain America journey started in California. I had flown to San Diego to see my godson and for the second year in a row I got to see the aftermath of the San Diego Comic Con. The plan was to visit my godson and then stop off in Wichita, Kansas to visit one of my childhood friends who is a very talented artist and his family. My wife and I were concerned that Captain America was going to leave the theaters while we were in California and we would have to wait for many months before we could see it.

Some of the best theaters in United States

After about five days in San Diego we boarded a plane for Wichita and our visit with Bob and his family begun. Four days of fun had passed and we talked about finding a sitter for the kids and going out as a couple. I immediately jumped at the chance to see Captain America. It is important to note that the theaters in Wichita, Kansas are some of the best in the United States. The Warren Theater chain has been retroed back to the style of the 30’s and 40’s.

Painful if it sucks

As we sit in the theater and wait for the curtain to go up (and yes there really is a curtain that goes up), I feel a bit nervous about the outcome of this Hollywood venture. Captain America is one of my favorite characters and I know that if this movie really sucks then it is actually going to be painful for me to watch. Bob and his wife are also there with me. I am hoping that they did not get a sitter and a rare night out to watch a film that is going to fall horribly short.

When the end of the film arrives I stop everyone from getting up before the credits roll, I know that there will be a brief preview of the next Marvel movie at the end. We sit in silence a few more minutes and get to see the Avengers teaser. I turned to Bob’s wife and say “Well, what did you think?” Almost as if she knew that I was worried, there was a slight pause and then she said, “I really liked it.” As we walked to the car, the excitement of the film continued to grow as we talked about how great Hugo Weaving was as the Red Skull. It was also discussed how Bob’s son would love the Red Skull as he is totally into the bad guys.

Someone has to make a statement

After I returned home, I discovered that the movie was no longer in the theaters here. I realized that I would have to wait until it was available on my favorite media outlet to get the chance to see it again. People have asked me if I liked the film and I said that I did, but it was more than that. Many times we go to the theaters today and we are beaten over the head with someone’s political views. Someone has to make a statement. Someone has to tell us how bad of a job we are doing at being the good guys. We are told that our heroes stand for truth, justice and all that stuff (you know who you are!!!!) and that we need to share them with the whole world.

We needed a hero again

Why did I like Captain America: The First Avenger? First, he is ours. I left the film for the first time in a long time proud to be American. Captain America embodies all that is supposed to be good in America. Just like America, he tries to do the right thing, but sometimes falls horribly short. We are now past the ten year anniversary of 9/11 and as a person who lived through those events in Washington D.C. I find comfort at times in heroes real and imaginary. My hat is off to Marvel for this one. We really needed a hero again. Captain America, if you are there (and with all due respect to all the other countries out there), Remember, America needs you!

P.S. Sorry Iron Man, but I am team Cap all the way in Civil War.